The India U-18 girls kicked off their SAFF U-18 Championship campaign with a bang as they defeated Nepal 7-0 in Jamshedpur at the JRD Tata Sports Complex in Jamshedpur on Tuesday, March 15, 2022. India next play Bangladesh on March 19.

The first goal of the night was scored by Priyanka Sujeesh in the 15th minute while Lynda Kom scored two more in the 17th and 35th minutes respectively. In the second half, India scored back-to-back goals — Apurna scoring in the 69th minute, followed by Purnima in the 77th minute. In the 87th minute, Sunita Munda made it 6-0, while Nitu Linda completed the scoreline in added time.

The first half saw India dominating possession, and India surged into the lead in the 15th minute when Priyanka Sujeesh went past the goalkeeper to slot it home.

Two minutes later, Lynda Kom scored the second off a brilliant pass from Anita Kumari from the left.

Lynda Kom scored her second in the 35th minute – this time off another magnificent cross from outside the box by defender Ritu Devi. 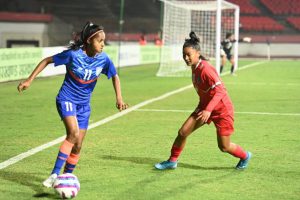 Lynda almost completed her hat-trick in the 42nd minute but it narrowly missed the target, as India headed to the half-time enjoying a three-goal cushion.

Changing over, the storyline remained the same with dominating the proceedings. Head Coach Thomas Dennerby made his first change in the 46th minute when Martina and Lynda were replaced by Apurna and Shubhang respectively.

Apurna netted the fourth goal as she curled it with her left foot.

Substitutions followed — Priyanka Sujeesh and Naketa were replaced by Nitu Linda and Poonam. The fifth goal came in the 77th minute – Purnima Kumari heading it in off an Astam free-kick.

Sunita Munda made it 6-0 in the 87th minute, while Nitu Linda scored the last one of the day in 90+6 when she tapped in Anita Kumari’s cross.