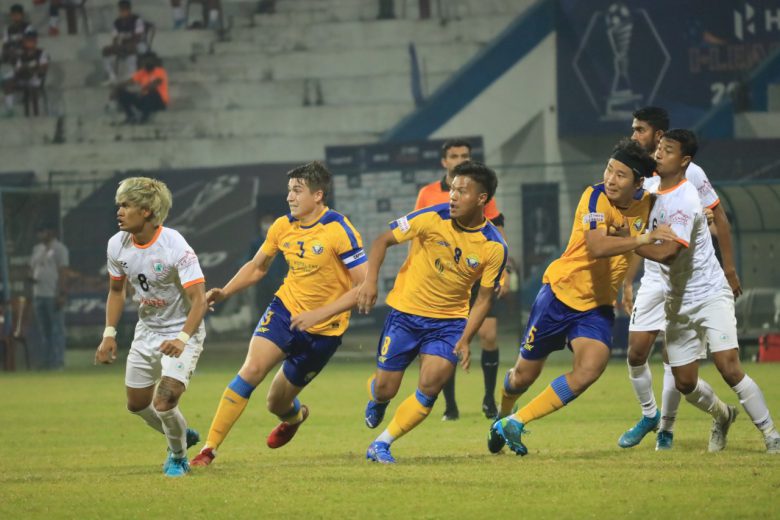 Real Kashmir managed to come back from behind with late goals as they managed to get away with a 3-3 draw against Neroca FC at the Kalyani Stadium on Tuesday.

Neroca FC entered the second half with a 2-0 lead, with an own goal from defender Ponif Vaz (18′) and a gorgeous header from Mohammad Kdouh (33′). Skipper Mason Robertson (48′) brought his team back into the contest, but Sergio Mendigutxia (58′) exceeded the gap by two goals once again with a tap-in goal. A late goal from the spot from Tiago Adan (88′) inspired Real Kashmir’s comeback as Surchandra Singh (90+6′) scored a goal in injury time to end the match in a 3-3 draw.

The match started with Neroca FC switching on attack mode as soon as the whistle blew, and in just the second minute, they created a chance that just went wide. Two minutes later, Real Kashmir got into the action as Mason Robertson picked up a cross from Abhash Thapa from the left, but his header went straight into Neroca goalkeeper Shubham Dhas’ hands.

Real Kashmir continued to create opportunities but an error in defense proved too costly for the Snow Leopards. Defender Ponif Vaz hit the ball into his own net giving Neroca FC a 1-0 lead in the 18th minute. A minute later, Fran Gonzalez went off due to an injury and was replaced by Surchandra Chandan Singh, handing another blow to Real Kashmir.

In the 27th minute, Tiago Adan made a run from the midfield and crossed the ball to Mason Robertson, but the Real Kashmir skipper could not get his foot on the ball from a close distance and the opportunity was missed. A few minutes later, Neroca FC doubled their lead as Mohammad Kdouh headed in a cross from Lallenmang Sitlhou into the net.

In the 41st minute, Mason Robertson sent in a dangerous cross inside the box for Tiago Adan, but Neroca FC defender Ben Nash cleared away the danger. At the stroke of half time, Real Kashmir goalkeeper Shubham Roy made a fumble on a long-distance attempt from Juan Mera, creating a big chance for Neroca FC but Khaiminthang Lhungdim’s shots were blocked by Real Kashmir’s defence.

Real Kashmir showcased intent straightaway in the second half, as Mason Robertson found himself on target as he got a goal back in the 48th minute to bring his team back into the contest. Two minutes later he received another opportunity but his shot from the near post went over the bar.

Just when Real Kashmir were starting to dominate, a tap-in goal from Sergio Mendigutxia further extended Neroca FC’s lead to 3-1. Mendigutxia was set up by Sweden Fernandes who went on a tremendous run, dribbling past Real Kashmir’s midfield, before crossing the ball to the Spaniard to set him up for the goal.

With both teams eyeing goals, the game converted into a box-to-box contest. Rohmingthanga went for a shot from long distance in the 72nd minute, but it just went over the bar. Minutes later, Kdouh went for a bicycle kick inside the box after a pass from Juan Mera but he failed to connect with the ball.

In the 80th minute, Robertson sent a lobbed pass for Tiago Adan inside the box, but his powerful left-footed shot was saved by Shubham Dhas. Minutes later, the drama continued as Tiago Adan struck a header inside the back of the net but he was ruled offside and the goal was denied, despite repeated protests from the Brazilian.

In the 85th minute, Tiago Adan was taken down inside the box by Dhanajoy Singh and the referee signaled for a penalty straight away. Tiago sent Shubham Das the wrong way and he converted from the spot, to reduce the gap to 2-3.