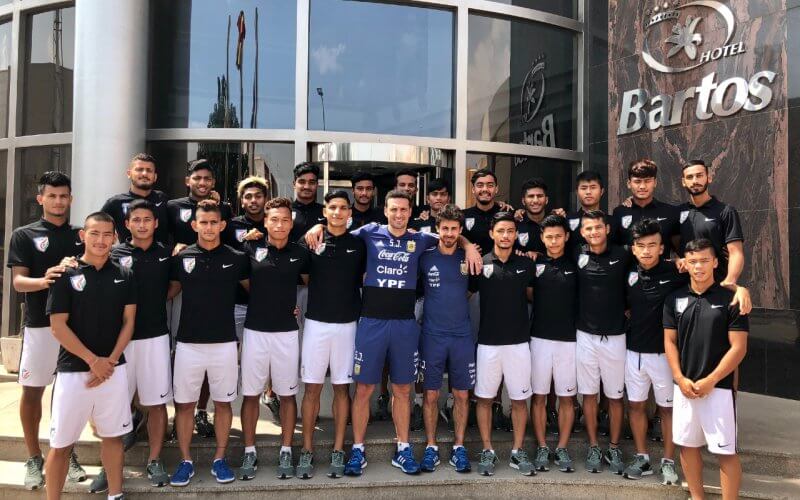 NEW DELHI: As Argentina went on to win the Copa America beating arch rivals Brazil by a solitary goal in the final on Sunday (July 11), half-way across the world on the other side of the globe, a bunch of young boys in India sat in awe and in surprise that the man who they had once met, three years back has now coached Lionel Messi and his teammates to lift one of the most prestigious titles in the World of football.

Before taking charge of the Albiceleste, Lionel Scaloni was coaching the Argentina U-20 side, when they faced their Indian counterparts in the COTIF Cup in Spain.

Suresh Singh Wangjam, who was an instrumental part of the India U-20 midfield, and has since gone on to exert his influence in the senior India side, was surprised when he first heard that the same coach had gone on to win a prestigious title.

“I actually didn’t know that he had become the Head coach at Argentina, and was quite surprised when I first heard. It was then that I recalled that we had played against the Argentina U-20 side coached by him, and we even met him after the game,” Suresh said to the-aiff.com.

“There was a bit of a communication gap, as he was not so fluent in English, but he praised us a lot, and said a lot of good things about us,” recalled Suresh. “It feels good that we had had such praises from someone of his stature.”

The India U20 side, had in fact, upset all the odds, as they beat Argentina 2-1 in that match. Scaloni and his boys were staying at the same hotel as India, and the Argentinian coach had a lot of good words, especially for captain Amarjit Singh Kiyam after the game.

“Indian Captain Amarjit Singh played very well against Argentina and Jeakson Singh was very impressive the manner he played,” Scaloni had said to the-aiff.com back in 2018. “We are happy to meet these young players. The Indian Team were very well behaved in the team hotel and there was mutual respect between both the teams.”

Amarjit himself recalled that both Scaloni and his assistant Pablo Aimar had met with the Indian team the day after the match, something that was a rather humbling experience for the young boy who had captained India in the FIFA U-17 World Cup the previous year.

“We had a brief meeting with the two coaches at the team hotel. We actually used to run into their team in the dining area,” recalled Amarjit. “But it was a surprise for me that, that both Lionel Scaloni and Pablo Aimar came to us and said so many good things to us. For a moment it didn’t feel like they were from such a big footballing nation.”

“I remember that he was also very happy at how humble we were, even after defeating Argentina. We were all in the same hotel, but we showed them a lot of respect, even after that win, and I think he appreciated that a lot. I felt really lucky to have met and spoken to them during that time,” said Amarjit.

Blue Tigers defender Narender Gahlot, who was also a part of that India U-20 side, was also surprised to see Scaloni winning such a prestigious trophy.

“He came across as a motivating coach. He told us to stick to the basics and encouraged us to do better in the future. He is an inspirational man.”

‘My hunger for success is non-negotiable’, says Ogbeche
Hugo Boumous on becoming a Mariner