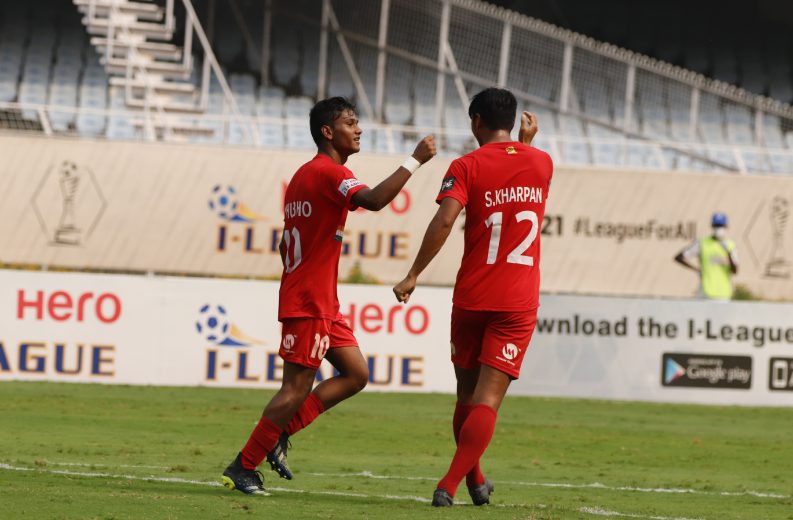 KOLKATA: Sudeva Delhi beat the Indian Arrows to move up to 18 points in their debut Hero I-League season at the Vivekananda Yuba Bharati Krirangan, West Bengal, on Saturday (March 19, 2021). Sudeva skipper and eventual Hero of the Match Shubho Paul’s 40th-minute strike was the difference between the two all-Indian contingents in a game full of chances.

The Indian Arrows got the first chance of the end-to-end game in the sixth minute as Harsh Patre’s shot from Parthib Gogoi’s cross was blocked by Gursimrat Gill. At the other end, Shaiborlang Kharpan met with Manvir Singh’s cross, but could not direct his header on target in the eighth minute.

Two minutes later, Sudeva came close to scoring after Arrows custodian Syed Bukhari failed to hold Gursimrat Gill’s cross. The leftover fell to Kean Lewis, who would have surely scored if it were not for some brave last-ditch defending from Abdul Hannan.

Sudeva kept pushing for the opener and churned out two glorious opportunities for their young forward Shaiborlang Kharpan. First, in the 14th minute, Kharpan had to dive and meet with Shubho Paul’s cross, only to see his effort go wide of goal. Two minutes later, Kharpan met with another cross but failed to keep his header on target.

Indian Arrows’ Gurkirat Singh almost opened the scoring in a remarkable fashion in the 19th minute. The striker broke past two defenders and sent in a curling shot from distance which crashed against the framework before coming back in play. Gurkirat was at the centre of the action again as he rose highest in the box to head Gogoi’s cross in the 26th minute, but his header was inches over the goal.

The game died down for the next ten minutes or so, before the opening goal finally came in the 40th minute when Shubho Paul pounced on the rebound of Kharpan’s shot from Manvir Singh’s cutback and gave his side a slender lead into the break.

After the changeover, Kean Lewis found himself inside the Arrows penalty area twice within the opening five minutes of the second half, but he was tackled and failed to capitalise on both occasions. Despite all their supremacy of possession, Sudeva were limited to long-range efforts as both Lalliansanga Renthlei and Manvir Singh’s efforts were wide of the goal in the 52nd and 55th minute.

Sudeva came the closest to doubling their lead in the 58th minute with Kean Lewis, but the winger’s lobbed effort landed on the roof of the net. Taison Singh created a good opportunity to level the score for Arrows in 61st minute, when he cut inside from the left flank and unleashed a shot aimed at the top corner. However, his effort lacked the curl as it flew past the upright.

Shubho Paul and Sudeva were denied the second goal by a brilliant save by Syed Bukhari after the young goalscorer had connected with Manvir Singh’s cross in the area in the 70th minute. At the other end, Rakshit Dagar had to be alert off another powerful long-range attempt by Gurkirat Singh, whose shot flew straight into his hands in the 74th minute.

Gurkirat Singh slipped a through ball sending Fela through on goal, moments later. However, the substitute’s heavy touch let him down as Dagar collected the ball. Three minutes later, Rostom Singh rounded past the keeper, but took too much time to find his finish and fluffed his lines, as the referee soon signalled the end of the game.

Hero of the Match Shubho had one final opportunity to find his second goal in the 89th minute, but his shot was blocked and the game ended 1-0 in favour of Sudeva Delhi. The Indian Arrows, despite all their fight, finished their Hero I-League campaign with a loss. Sudeva, meanwhile, have extended their winning run to three games.

Also Read: Aizawl FC get back to winning ways after defeating Chennai City FC in style