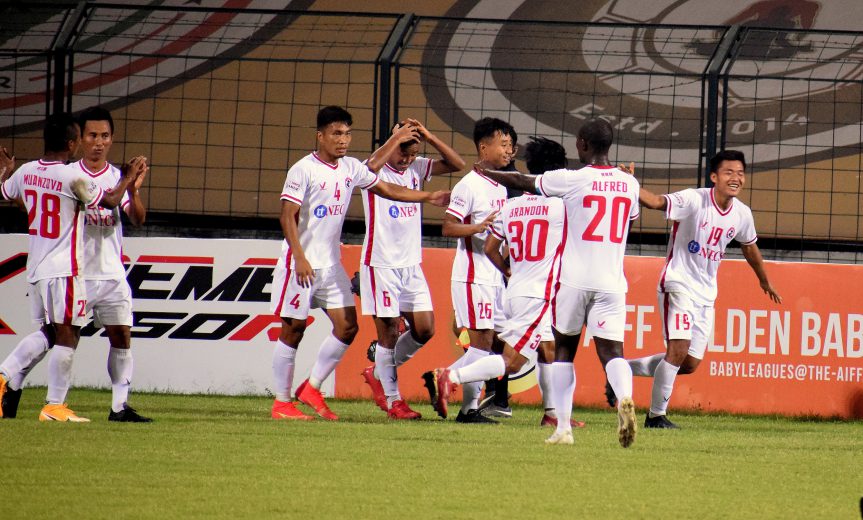 KALYANI: Aizawl FC got back to winning ways as the Yan Law-coached side defeated Chennai City FC 3-1 at the Kalyani Municipal Stadium in Kalyani, West Bengal on Saturday (March 20, 2021). A brace by Brandon Vanlalremdika and a goal by David Lalhlansanga led the people’s club to an easy win over their opponents, after Mohammed Iqbal had pulled a goal back in the 90th minute through a penalty kick, in a match that was largely dominated by the Mizoram-based club in terms of chances created.

With NEROCA being relegated in the last game-week, both Aizawl FC and Chennai City FC were playing for pride, wanting to finish the last few matches of the season on a positive note. Aizawl FC started their usual game of attacking football from the opening minutes of the match, but it was Chennai City FC that dominated possession and had the first real chance.

In the 9th minute, Sriram released a well-weighted cross for Rajesh in the box. Although Rajesh controlled the cross with his first touch, he was unable to find the net from close range and with no real pressure as Aizawl FC survived a dangerous spell of play.

The people’s club had their first opportunity of scoring a goal in the 12th minute when Alfred Jaryan picked up the ball from 30 yards out and released a venomous shot that was parried away by the Chennai custodian. But it was only a matter of time before Aizawl opened the scoring.

In the 21st minute, Brandon applied the finishing touches to a beautifully worked goal that saw Aizawl utilise the flanks to maximum potential for building up their play. A delicious Lalremsanga cross from the right flank had found Brandon and he made no mistake, as he tapped it home.

Aizawl FC continued with their attacking style of play and in the 36th minute, once again breaching the opposition defence. David jumped higher than his marker and met a Lalremsanga cross from the right flank with a thumping header that crashed into the back of the net to hand Aizawl FC a two-goal advantage.

Chennai City FC once again lacked creativity in the final third and even when they had chances, failed to make the most of them. The half-time scoreline read 2-0 in favour of Aizawl FC.

It did not take Aizawl FC much time to establish their dominance in the match and take an unassailable lead. In the 47th minute, Brandon capitalised on a defensive misunderstanding in the box, where the Chennai’s defence line was unable to clear a cross from the right flank. Taking advantage, Brandon toe-poked the loose ball home from a close range to hand Aizawl FC a 3-0 lead.

Stunned after conceding so early in the second half, Chennai City FC looked like they completely shut shop as passes were mistimed and possession easily lost. Taking advantage of Chennai’s slump, Aizawl FC dominated possession and tried to add more to their tally of three goals.

Chennai had two opportunities to reduce its deficit, but both went to waste. First, in the 54th minute, Iqbal Hussain’s cross from the flank just needed a touch from a Chennai body inside the box, but there was no one to be found as the ball ran away for a goal-kick. Then, in the 75th minute, faulty defending by Aizawl FC handed Iqbal a chance to score from close range, but his shot was blocked. The ricochet fell to Sriram, who failed to find the net from a first-time volley.

In the 89th minute, Chennai City FC were awarded a penalty and Mohammed Iqbal’s clever spot-kick reduced the deficit to two goals as the scoreline read 3-1 in Aizawl’s favour. Although Chennai had a couple of chances in the dying embers of the match, they never really looked confident in the final third and chances went amiss. The full-time scoreline read 3-1 as Aizawl FC registered an easy win.

Also Read: Pride to be at stake as Real Kashmir FC take on RoundGlass Punjab