“I like to take on a challenge,” Akhil tells me on the phone. “Only once you take up a challenge, you will learn a lot.”

Akhil became one of the youngest ever coach at 23 to complete and obtain an AFC ‘A’ Diploma in 2019. With an A license, the AIFF grants permission to coach top-tier professional teams. Candidates need to appear in three practical, two theoretical examinations, one dissertation and other continuous assignments over a six month period.

Akhil Kothari began his coaching career at Kenkre FC by assisting Floyd Pinto, the former head coach of the Indian Arrows and the India U-19 team. He then went on to coach the Maharashtra State U-14 Boys team in 2016 and 2018. The team went on to qualify for the final round of the Sub Jr. Nationals. The Mumbai-based coach has also been Head of Grassroots Development and Youth Team Coach at Iron Born FC, who play in the Youth I-League and the MDFA league (Mumbai District Football Association).

A chance encounter with Adib Kenkre

“While studying at St. Marys, I played various sports but football stuck with me’’, says Akhil. St.Marys, which has a rich sporting culture, was the perfect launchpad for Akhil to showcase his footballing talents. He has represented the school all through the U-8 age group to the U-16 MSSA league. It was in the 2009-2010 season when an MSSA match against Adib Kenkre’s side, the founder of Kenkre FC changed Akhil’s footballing trajectory. The veteran coach was thoroughly impressed with his performance and invited him to join the Kenkre academy. From there on, Akhil progressed from the U-17 team to the main team. “You need good people to guide you and support you, otherwise it’s difficult,’’ when asked about the club culture at Kenkre FC. In a city and nation obsessed with cricket, Kenkre Football Club established it’s academy in 2000, operating on a shoe-string budget. The club has gone on to establish its own successful academy and is rated amongst the best in India by the AIFF.

An Injury into an Opportunity

In 2014, Kothari had a serious knee injury, which saw him undergo rehabilitation at the Don Bosco Center in Matunga. This meant being left out of the first team, which was a tough period for the midfielder. But at the center, while Kothari was undergoing rehabilitation, children used to train in the evening. “I slowly started interacting with the kids, which I found meaningful after a while.” Noticing this, Kenkre FC CEO Joshua Lewis and an elderly well-wisher advised the then 18 year old Kothari to train the children. “I then began training them twice a week due to my commitments with the first team,” Kothari adds.

After a few months of training the children, Joshua and the elderly well-wisher advised Kothari to try his hand at coaching and apply for an AIFF ‘D’ License. “Attending the D license course changed my view of football in 2014. You look at things very differently as a coach.”

“My transition from player to coach was smooth. I am very fortunate that it has been effective. Right people giving the right advice at the right time smoothened my transition to being a coach,” when asked about his first few months into the profession.

Kothari joined Kenkre FC as assistant coach to Floyd Pinto for the U-17 team. Upon Pinto leaving to coach the India U-19 squad, Kothari was appointed head coach of the U-17 team. “We even had foreign exposure trips, where the learning curve was steep,” a reminiscent Kothari mentioned. He then quickly progressed to be the assistant coach of the Kenkre main team,who were vying for a place in the coveted I-League.

A factor which enhanced Kenkre’s main team was the smooth transition of players into the first team. Experienced players welcomed the younger ones into the team, which formed an incredible team spirit. The team reached the final round of the second division I-League,only to fall short.

Upon leaving Kenkre FC in 2018, Akhil was appointed Head of Grassroots Development at Iron Born FC. He was also the youth team coach. A newly established football club, Iron Born FC focuses on the development of grassroots football. The club also takes active participation in a footballer’s nutrition and injury prevention as part of their academy structure. 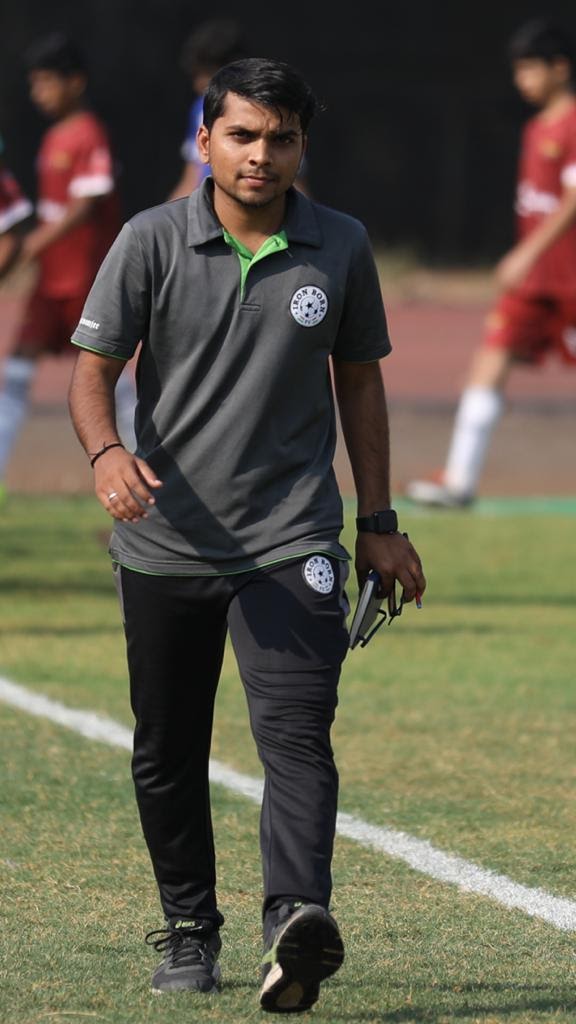 The 24 year old relishes the challenge when being asked about his transition from an environment of experience to that of the unknown. “As a coach, it’s important to be in a competitive environment. We were playing in the youth I-League, MDFA leagues. I tried a lot of new tactics and experimented. I failed at first but got a few successes along the way. Doing this day in and day out made me learn many aspects of the game at once.”

On Mumbai and Indian Football

Kothari, who has been part of the Mumbai footballing culture for close to a decade has seen a lot of changes. The biggest change is the opportunities which are being created. The All India Football Federation (AIFF) has introduced the Golden Baby League concept, which wants children from the ages of 6-12 to be properly introduced and trained in football.

“I directly played in the U-19 I-League. With the AIFF Golden Baby League, opportunities are being created for both boys and girls, which leads to long term football growth in the country.”

The MDFA (Mumbai District Football Association) has undergone a sea of change, says Kothari.Youth leagues have been created for both boys and girls, an aspect which has seen the sport grow in the city. The MSSA (Mumbai School Sports Association) has created age specific tournaments. The U-8 tournament is now five a side, changed from eleven a side in the previous decade. “Creating opportunities is the long term goal for Indian football. Once we create opportunities, the results will start speaking for themselves. Indian Football is on a positive trajectory.”

“Surround yourself with good people, which I got at both clubs and I consider myself very lucky,” Akhil says, sounding grateful about the past decade. His calm demeanor is the perfect companion to a competitive and sporting spirit. Though the COVID-19 pandemic has slowed football and career opportunities, Akhil is confident about the faith and skill he has acquired over the years. Akhil ends the call with a familiar line, “I like to take on a challenge”.