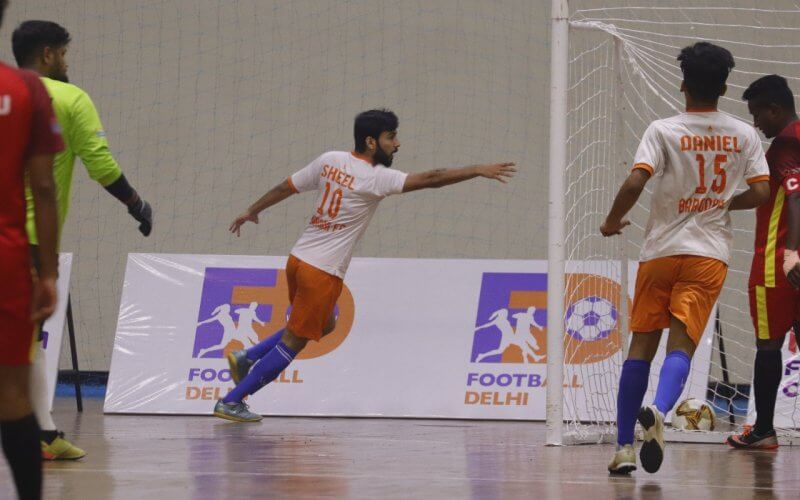 In a game where Mohammedan SC had the opportunity to become the first team to qualify for the semi-finals of the Hero Futsal Club Championship, the team from Kolkata came out with flying colours as they defeated Chanmari Zothan by a margin of 5-1 on Tuesday (November 9, 2021).

Filbert Pereira opened the scoring for Mohammedan SC on the 11th-minute mark, with neither team going too heavily to attack the position goal. For the entirety of the first half, it looked like both teams were waiting for the other to commit a mistake and once they did, pounce on it immediately. Mohammedan SC went into the break with the slightest of leads and the game still up for grabs for either team.

However, after the break, the floodgates opened when Filbert scored his second of the game in the 22nd minute to give his side a much-needed cushion. This forced Chanmari Zothan to come out of their shells and leave spaces for the opposition team to attack. Hilton Fernandes and Snedden made the most out of those spaces as they scored a goal each, stretching their team’s lead to 4 goals.

Roluahpuia pulled one back for the side from Mizoram but it was just a consolation goal for them. Filbert in the end, put the icing on the cake for Mohammedan SC by scoring a goal in the 38th minute and completing his hat-trick.

Having topped the table in Group A, Mohammedan SC will face off against the winners of group B in the first semifinal on Friday (November 12, 2021).

After a difficult couple of matches in the opening stages of the Hero Futsal Club Championship for Baroda FC, the Gujarat outfit ended their tournament on a high having defeated Super Strikers Futsal Club by a scoreline of 5-4.

Baroda FC opened the scoring as Sheel Parikh struck the back of the net on the 7th minute mark. Super Strikers though, equalised almost immediately, with Yogith scoring a couple of minutes later. Vivek Easwaran put Super Strikers FC into the lead, and it looked like this would be another bad day at the office for Mohammad Rizwan’s side.

In the second half, Baroda FC came out with renewed vigour with one last push in them. Sheel Parikh scored twice, in the 30th and 32nd minute, completing his hat-trick and putting his side back into the lead. Yogith equalized almost immediately for Super Strikers FC and no one could predict on which side would this game end.

Varshil Doshi and Daniel Patel stepped up in the dying moments for Baroda FC, by scoring back-to-back goals in the 38th and 39th minute, but Nikhil Ayyappa scored one for Super Strikers as well. In the end, there was not enough time for Super Strikers to grab another goal and all three points headed towards Baroda FC.

With this topsy-turvy game, the matches in Group A came to an end. Mohammedan SC have qualified from this group for the semi-finals with 9 points on the table, while Super Strikers, Chanmari Zothan, and Baroda FC all finished on 3 points.

“I want to make a mark for the city of Pune in Indian football”: Nikhil Mali
Sporting Club de Goa win in final group game but Bengaluru enter semifinal on head to head