“I want to make a mark for the city of Pune in Indian football”: Nikhil Mali 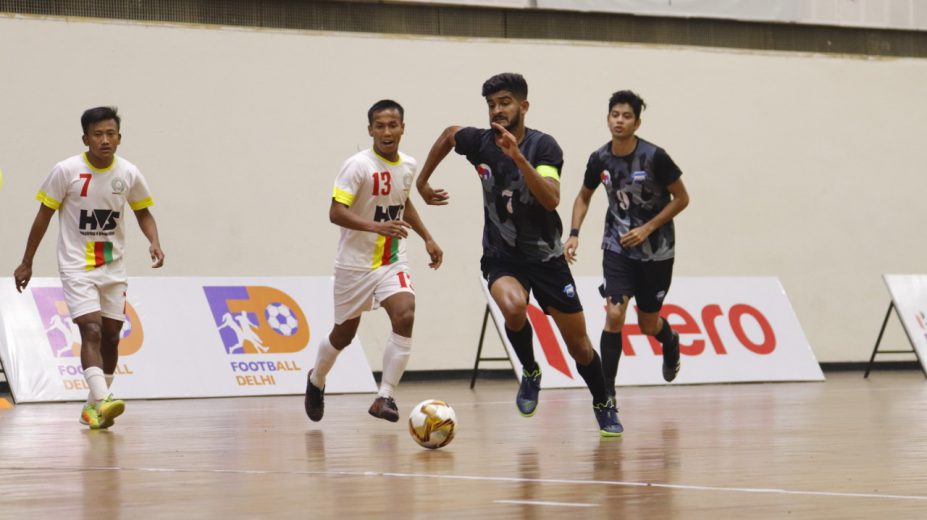 Delhi FC skipper Nikhil Mali has been in red-hot form in the ongoing Hero Futsal Club Championship 2021, having netted a whopping 10 goals in his side’s opening two matches in the competition.

A footballer by trade, Mali credits his background as a Futsal player for his skillful dribbling abilities and close control with the ball at his feet.

Speaking at the sidelines of the Hero Futsal Club Championship 2021, he said, “Playing Futsal has helped me develop essential technical skills in football. Futsal is all about close control and beating your man one versus one, which is essential in football for me as I play on the wings, so I often find myself in a one versus one situation where I have to beat the defender, get a cross in or shoot inside the goal. Playing Futsal from a young age has also helped me to use both my feet efficiently while playing, which gives me a good advantage and makes my game unpredictable.”

The Pune-based striker spoke about his ambition of making his hometown proud as he aims to cement his place in the big leagues. Nikhil aspires to see his fellow Punekars do well in football as he wishes to set an example for his peers to follow.

“Presently in Indian football, there are very few players from Pune who have secured regular game time in the I-League or the ISL. My goal is to change that as I dream of representing the Indian football team or the Futsal team one day. I want to make a mark for the city of Pune in Indian football, and hope that I can one day set an example for young players in my city to follow,” said the 24-year-old.

“The setup here at Delhi FC is very professional and there is a lot of dedicated focus on training for the Futsal team. We are eager to do well in this competition as the AIFF is staging the Futsal Club Championship for the first time and that too at an extremely grand level. For Futsal players, this competition is like the I-League of Futsal. Hence, we are very focused on this tournament,” Nikhil added