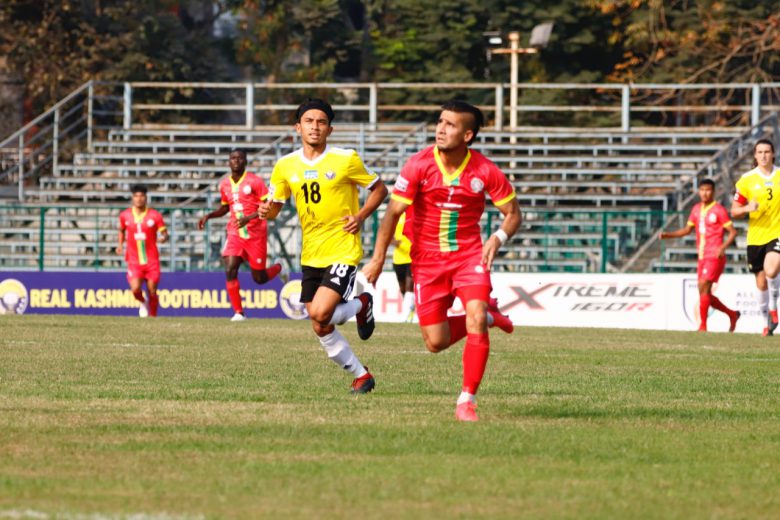 KOLKATA: 9 seconds! That’s all the time TRAU’s Tajikistan striker Komron Tursunov took against Real Kashmir FC to score the fastest ever goal in an Indian top-tier League match. At the team hotel, Tursunov spoke to www.i-league.org about the 9 seconds wonder, the conglomeration of Indo-Tajik culture, Mithun Chakraborty being a heartthrob in Tajikistan, his stint in India so far, the Hero I-League, and much more. EXCERPTS:

Is 9 your favourite number?

When did you come to know that you have become the fastest scorer in Indian domestic football scoring in 9 seconds?

After the match, my teammates told me that it was the fastest-ever goal in Indian domestic league football.

What were your initial feelings?

Initially, I didn’t feel much. But after some time I gauged its magnitude and significance.

And you discovered that you made history.

(Laughs again) History repeats itself. Today if someone scores history, tomorrow someone else will. But I feel very proud that my name will be remembered by all the fans for some time at least.

Describe the goal for us.

As a striker, you get maximum 2-3 seconds or even less to make a decision. The Real Kashmir defenders were trying to close it down. I spotted a yawning gap and I had to finish it off. Had I delayed or looked around for a square pass, the goal would not have come. I went for it, and BANG. That it came so early is the biggest bonus.

Do you remember how many steps you took prior to the shot?

Komron’s room partner Khaidem Vicky Meitei who was busy on his phone all this time lifts his head and mentions: “Such a great start to the season. The goal gave us huge confidence.”

What has been your impression about India so far?

People are very friendly here. India has been an integral part of everyone’s upbringing in Tajikistan. We sing songs, watch movies, and get to know the megastars.

Do you mean Bollywood?

So who are the favourites?

Mithun Chakraborty is a heartthrob in my country. I am a big fan of his. The song ‘Jimmy Jimmy’ is an eternal favourite. Him apart, Shahrukh Khan, Amitabh Bachchan, Aishwarya Rai Bachchan are also very popular. Hindi songs are played all over in pubs, parties, clubs, family functions. We also watch a lot of Hindi channels. I can even speak some basic Hindi.

Why did you opt to play League football in India?

Sociologically, I feel at home in India. Kolkata is my second home. The love which I got from the fans here last season on my way to be crowned Hero I-League champions with Mohun Bagan will stay with me forever. The love and affection I get here make me special. The Hero I-League is special for me.

The season in Tajikistan got over in November and will again kick-off in April. I didn’t want to sit idle for 5 months and hence, took up the offer from TRAU. I had a chat with Mr Phulen Singh (Hony Secretary, TRAU). I also had offers from quite a few other clubs. But if I am in TRAU, it’s because of him.

Did you get to know the Manipuri culture?

I was in Manipur for a month. I stayed in an apartment and didn’t get to move around. But the food in Manipur is too spicy. Vicky tried to make me taste it. But it is spicy. (Vicky laughs aloud).

How has your experience been in the bio-bubble?

We turn to Vicky and ask him: How is Komron as a person?

Komron quips: “Vicky is my best friend. All-day he and I spend so much time together. He looks like Jackie Chan. (both burst out in laughter). But I know Jackiechand Singh. He plays for the Indian National Team.

Vicky adds: “Komron is a good guy. Initially, there was some language barrier between us. But now we communicate well. He brings with him tons of experience and we are lucky to have him in the club. He trains very hard, and that gives out good emotions.”

Komron adds: “Apart from football I like tennis, watch movies and love to read books. In fact, Kibu Vicuna asked me to learn elementary English. He has had a huge influence on me. Biriyani is my favourite food.

In comparison to Mohun Bagan’s dream squad last season, where do you rate TRAU in this season?

The two are entirely different propositions. Bagan were the perfect blend of experience and youth. Here, all the players are young. They may go on to represent the Indian National Team in the near future. There are some really talented players in TRAU.

Gone in 9 seconds: A new season starts with a new record
U-16 National Team set for exposure matches against UAE