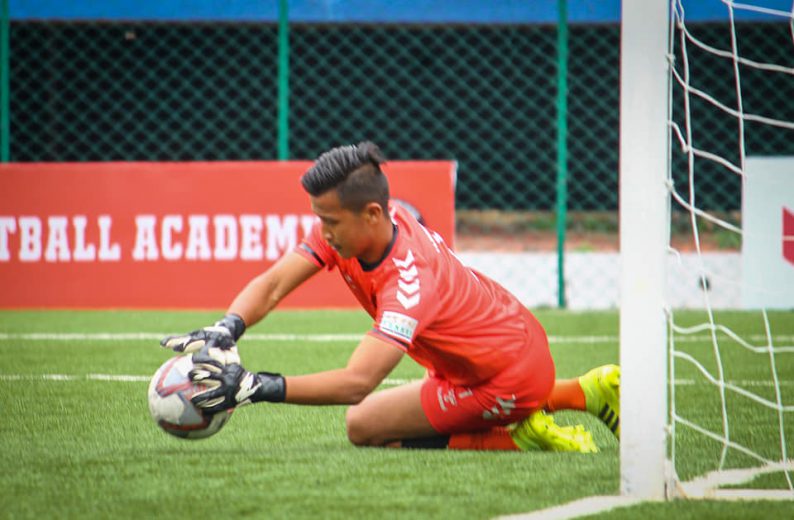 Tibetan goalkeeper Tenzin Samdup shares about his experience with Kenkre FC during their recent I-League Qualifiers campaign, Coach Akhil’s philosophy, and his own performance

Tenzin Samdup is a Tibetan refugee born in Pune, Maharashtra. He was brought up in Himachal and started his football journey in Bangalore while completing his undergraduate degree. Surprisingly, Tenzin was a teacher in a monastic school for three years in Mundgod, Karnataka, before becoming a professional footballer!

Tenzin –  My football journey started when I was doing my degree in Bangalore; we Tibetans have never considered football, a matter of fact, any sports as a career, even though the love for football is the same as Our Indians love for cricket. However, when it comes to pursuing it as a career, it’s still a road not taken. And that perspective for me changed in college when I started playing in Bangalore, and people started appreciating my skills and suggested I give trials in clubs.

So that’s how it actually started but with no family and financial backing, it’s always a fight against your family and yourself. Being the eldest in the family, You don’t always get to choose what you want. We are a simple middle-class Tibetan family trying to make ends meet, so sometimes dreaming also seems unlikely.

Since India is our second home and we have our own exile government and everything, we also have a Tibet national team consisting of Tibetan players from exile. Every year we have a tournament in memory of His Holiness. The Dalai Lama’s mother and Tibetan teams from all over the world participate. So from there, players are shortlisted and are called on trials for the national team. My selection in our national team started the same way.

2. When and how did you join Kenkre?

Tenzin –  I joined Kenkre FC a month before the qualifiers; I talked to two-three clubs for the qualifiers, and one day, my friend Ranjeet called me, and he told me that he was signing with Kenkre along with some of my ex Chennai city teammates.

Even though I knew nothing of the club or the style they play, I blindly said yes because I see the quality players they are, and with the short time we have in our hands, we need that understanding and the chemistry within the team. So I thought that’s the most practical thing to do since we have played with each other and won the I-League once, and that was the best decision I have taken so far. What a journey the team had!

3. How has been your experience so far with Kenkre?

Tenzin –  To be honest, the first few days were challenging with the Mumbai heat and the practice timing. Still, as we moved closer towards the league, the team became more solid, and kudos to the management for bringing such talents, local talents from Mumbai, and giving them such a vast platform. 4. You came so close but missed out on the title! Your views on this?

Tenzin –  Well, that’s still a fresh wound, and I think that will stay and haunt not just me but all of us for quite some time. My only aim when I signed for the team was to help them get the promotion and to get so close and not get hurt. I was absolutely gutted with the result, and I couldn’t even say it’s okay because it’s not, but what can I do! Football is cruel sometimes. We keep our heads up and move on!

5. You have played under many coaches, how was Akhil Kothari’s coaching different?

Tenzin –  Playing under Akhil was all about discipline, and that’s what we did throughout qualifiers, and we got the results. We only lacked the final touch, but apart from them, it was quite an experience. Even though we didn’t have many high-profile names in our team, we still played with such courage and were brave on the ball, and that’s all because of our gaffer.

He has been insistent on keeping the ball on our feet since Day 1, and I believe that’s why we got so far in the qualifiers and could have gone further; we deserve it.

6. What were the things you think you and your team could have done better? Also, you shared the most number of clean sheets record in the campaign. Are you happy with your performance?

Tenzin –  We all know what we could have done better, convert the chances we got. Just one would have been fine, but that’s a lesson for the future now.

About the clean sheet and individual performance, yes, it’s always a great feeling to help your team whenever it’s needed and called for. I was doing my part, and a lot of the credit for those clean sheets goes to my teammates for being so disciplined defensively. It’s a collective achievement.

7. What are your future plans and ambitions?

Tenzin –  Well, the aim is playing in the I-League for now, I so wanted to be with this team, but unfortunately, we couldn’t qualify. We deserve to be there, you all have seen the football we play, but we don’t always get what we deserve in life. But let’s see, it’s always fun to take up new challenges, and I am ready for what’s to come next.