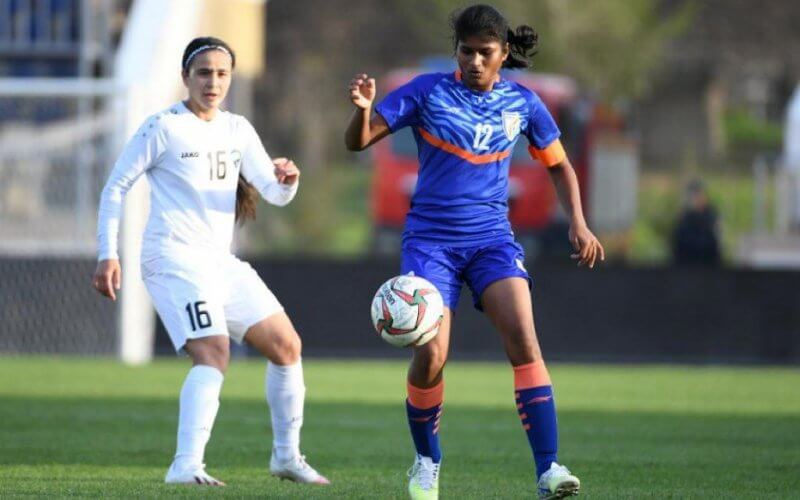 India lost by the faintest of margins in their first friendly in Uzbekistan, as the hosts grabbed victory with a late goal at the AGMK Stadium, in Tashkent, Uzbekistan, on Monday (April 5, 2021).

While both sides created ample scoring opportunities, Uzbekistan found the back of the net with a late free-kick by Maftuna Shoyimova on the 87th minute, to win by a narrow margin.

As the Uzbeks started off on a higher tempo in near-freezing conditions, that are mostly unfamiliar to the away side, India keeper Aditi Chauhan was called into action early on, as she did well to get down and grab a low cross from point-blank range.

India looked to hit the hosts on the counter in the early exchanges, with defender Ranjana Chanu combining with midfielder Sangita Basfore to create an opportunity down the left, but the danger was eventually averted by the Uzbek defence.

The Indian defence staved off the early Uzbek attacks, inspired by Sweety Devi, who did well to deal with the continuous aerial threat by the hosts.

India soon began to warm-up to the game, as Manisha found some space in the Uzbekistan half in the 24th minute, and unleashed a ferocious left-footer that whizzed over the crossbar.

A few minutes later, Soumya Guguloth made her way into some space in the Uzbekistan box from the right. She turned and tried to curl it with her left foot, but it was blocked.

In the dying minutes of the first half, Uzbekistan launched another attack that saw Nilufar Kudratova hit the crossbar, before the ball was cleared from inside a melee of legs, as the referee soon brought an end to proceedings.

Daya Devi, who replaced Pyari Xaxa in the first half, looked lively in the opening exchanges of the second, as she pressed high up on the pitch, to force an error from the Uzbekistan defence, with the help of Soumya Guguloth. The former looked to play it into the path of an onrushing Dangmei Grace, but it was intercepted.

Around 10 minutes into the second half, Manisha combined well with Ranjana Chanu to work the ball up the pitch down the left flank. The young attacker found a channel to Daya, who turned her marker inside the box and crossed it in. However, the ball evaded all the attackers and defenders, and the danger was soon averted.

Uzbekistan had a clear chance to take the lead when midfielder Maftuna Shoyimova nodded a corner towards goal, but Anju Tamang cleared it off the line.

On the 65th minute, India broke on the counter as Sangita Basfore won the ball in India’s defensive third. Under pressure, she managed to poke it onto the path of Dangmei Grace, who carried it into the attacking half, and curled an aerial through ball into the path of Manisha, who slipped through between two defenders. The attacker queued up her shot, but it lacked power and the opposition keeper managed to gather the ball.

Soon after, a cross by Anju Tamang was not cleared properly, as it fell kindly to Soumya Guguloth, who instantly had a try at goal from inside the six-yard box. However, it was cleared off the line.

The hosts found the back of the net with just three minutes of regulation time left on the clock, when Maftuna Shoyimova slotted a free-kick from around 25 yards out, into the top corner.

Thus, India’s first friendly match in Uzbekistan this year, ended in a narrow defeat to the hosts.