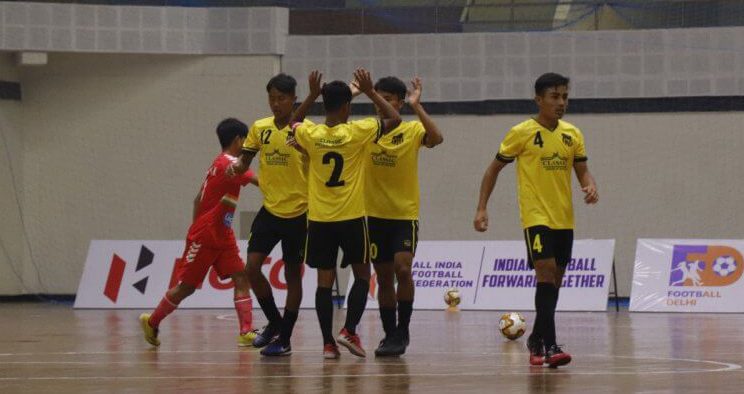 Mangala Club, Classic FA continue unbeaten run in Group D and will face in the virtual quarterfinal in their last group game against each other

Hailing from the state of Odisha, Mangala Club has made a huge mark on the Hero Futsal Club Championship. In their first match of the tournament, Mangala Club defeated Sudeva Delhi by five goals to three, and today, they dominated the game against Kashmir FC, with the eventual scoreline reading 18-3.

Right from the word go, Mangala Club was attacking the Real Kashmir goal time and again. They got their opening goal in the 3rd minute, as Babul Kumar put the ball into the back of the net. Dinabandhu Das scored just a minute after that, and Babul got his second in the 9th minute, stretching his side’s lead to three goals in the opening 10 minutes.

Sabareesh Sundar pulled a goal back for Real Kashmir in the 13th minute, but Dinabandhu Das scored his second goal just seconds after that to restore his side’s 3-goal advantage. The scoreline stayed 4-1 heading into the interval, but this was just the calm before the storm.

After the half-time interval, Mangala Club went out all guns blazing. They scored a total of 14 goals in the second half, with Dinabandu Das and Babul Kumar their marksmen. By the end of the match, Dinabandu Das and Babul Kumar scored 8 and 6 goals respectively, with Bijay Kumar and Niranjan Behera with a brace. Real Kashmir had little joy in the game, with Aafreen Basharat scoring one and Sabareesh Sunder getting a brace.

The next assignment for Mangala Club will be against Classic Football Academy, who is on a hot streak of their own, having scored 15 goals in their first game of the Hero Futsal Club Championship. As for Real Kashmir, they are eliminated from the tournament with one match left.

Classic Football Academy continued their blistering start to the Hero Futsal Club Championship as they fetched another 3 points by defeating Sudeva Delhi FC by 6 goals to 1.

In their first match of the tournament, Classic Football Academy put 15 goals past Real Kashmir FC, and they brought that confidence into this match as well, as they comfortably defeated Sudeva Delhi FC. The proceedings started in a positive manner for the side from Manipur, as they went ahead following an own goal from Phoenix Oinam.

That was followed by a goal from Robert Singh, who scored in the 7th minute, with Samson scoring in the 15th minute. Serto Worneilen scored just a couple of minutes later to stretch Classic Football Academy’s lead to 4 goals.

In the second half, proceedings continued in a similar fashion as Classic Football Academy dominated the ball. Ganningam scored in the 28th minute to make it 5-0. Korou Singh scored the solitary goal for Sudeva Delhi FC before Ganningam got his second which wrapped it all up.

This result means that Sudeva Delhi FC has been eliminated from the tournament. Classic Football Academy on the other hand, are on top spot in their group but are separated only by goal difference, with Mangala Club breathing down their neck. Classic Football Academy and Mangala Club will come up against each other in the final game of the group stages, with a draw for the team from Manipur enough to guarantee a place in the semi-finals of the tournament.