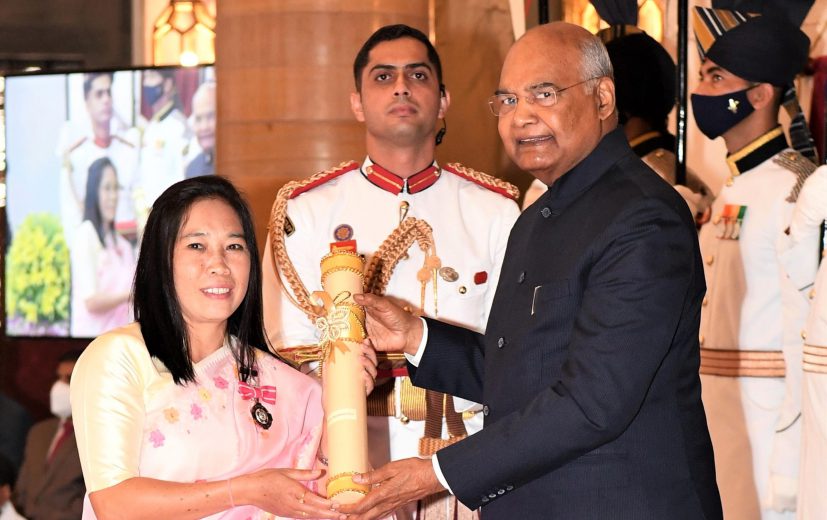 Oinam received the Award in the Capital earlier today (November 8, 2021) from the honorable President of India Shri Ram Nath Kovind. The function was held at the Rashtrapati Bhawan.

Mr. Praful Patel, President of, All India Football Federation in his statement said: “Congratulations! It’s an extremely proud moment for Indian Football. Bembem Devi has been a role model for Indian Football and won so many laurels for India over the years. I hope more girls draw inspiration from her and take Indian Women’s Football to greater heights.”

Mr. Kushal Das, General Secretary, All India Football Federation in his statement said: “Bembem is a living legend and has been the flagbearer of Indian Women’s football over the years. 2022 is the year of Women’s Football in India as we are hosting the AFC Women’s Asian Cup India 2022, and then the FIFA U17 FIFA World Cup India 2022. I am confident this Award will provide the necessary fillip to inspire the next generation, and generate interest among all stakeholders. Congratulations!”

Mr. Das also made a mention of Bembem’s contribution to the sport as a coach after hanging her boots. “Post-retirement Bembem has been transferring her knowledge as a coach, having been a part of Indian National age-group teams, and also at the club level. I wish her all the best for her professional and personal life.”