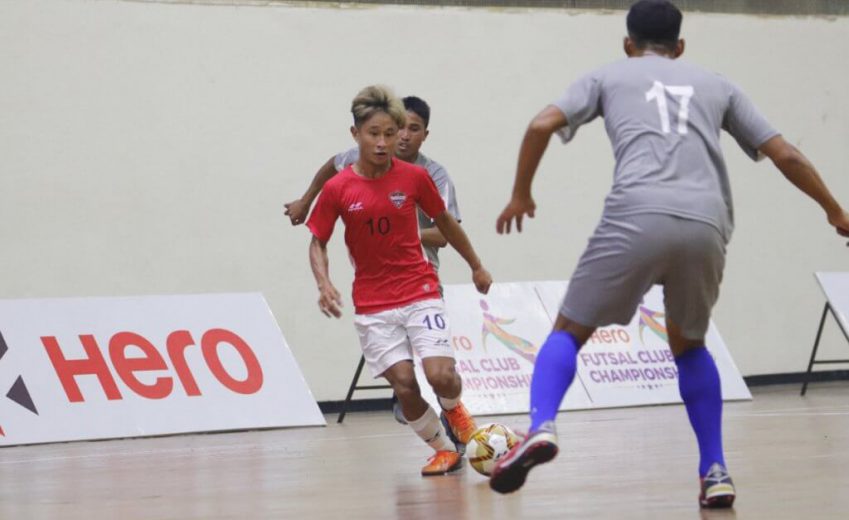 Another day and another dominating performance from Delhi FC in the Hero Futsal Club Championship has taken them to six points on the table, as they defeated Tiddim Road Athletic Union (TRAU) by a scoreline of 13-1.

The game started with both teams going toe-to-toe in the opening stages of the game, and it was TRAU who scored the first goal of the game in the 8th minute as Milan Singh found the back of the net. This shock brought life into the Delhi FC side and thereafter, they dominated the game from start to finish.

Nikhil Mali scored two goals in three minutes for the capital side, taking his team into the lead by the 14th minute. Lalpekhlua, Rohit Mulchandani and Kitboklang scored three more before half-time and suddenly, within a span of 8 minutes Delhi FC had a 4-goal advantage. Jetlee Singh was also given a yellow card in the 18th minute of the game.

The flow of goals continued, as Nikhil Mali completed his hat-trick in the 25th minute, with his strike sandwiched between goals by Lalpekhlua and Bhagirat Singh. In the final five minutes of the game, Delhi FC went on a goalscoring spree, with two more goals from Nikhil Mali, a brace for Lalremruata and a goal in the 40th minute by Tejas Bhandari completing the onslaught.

TRAU have been eliminated from the Hero Futsal Club Championship following this result, as they have secured just a single point from their two games so far. Delhi FC on the other hand, have six points on the board and are odds-on to qualify to the next round, with two huge victories handing them a huge advantage over 7Wasa Sports & Cultural Club, who are on 4 points.

After a draw in their first game of the Hero Futsal Club Championship, 7Wasa United Sport & Cultural Club registered an emphatic 8-2 win against Telongjem FC to move to the top of the table in their group.

The game started in the favour of Telongjem FC as they opened the scoring in the 4th minute via Moasunep. 7Wasa did not take too long to respond as they equalised with a goal from Sumer in the 7th minute, and they took the lead a minute later courtesy of a great strike from Wadajied Kynsai.

Telongjem FC hit back with a goal, and brought the game on level terms once more, but after that, it was all 7Wasa as they dominated proceedings. Primrose Lamat scored a couple before the half-time whistle to put his side into a 2-goal lead before the interval.

The side from Meghalaya continued their free-flowing football in the second half and goals followed as well, with a goal from Riburom Jat, a brace from Samson Nongrum, and a goal from Primrose Lamat which completed his hat-trick.

With this win, 7Wasa move to four points on the table, while Telongjem FC have failed to collect a single point in their two games, crushing out of the tournament in the process.