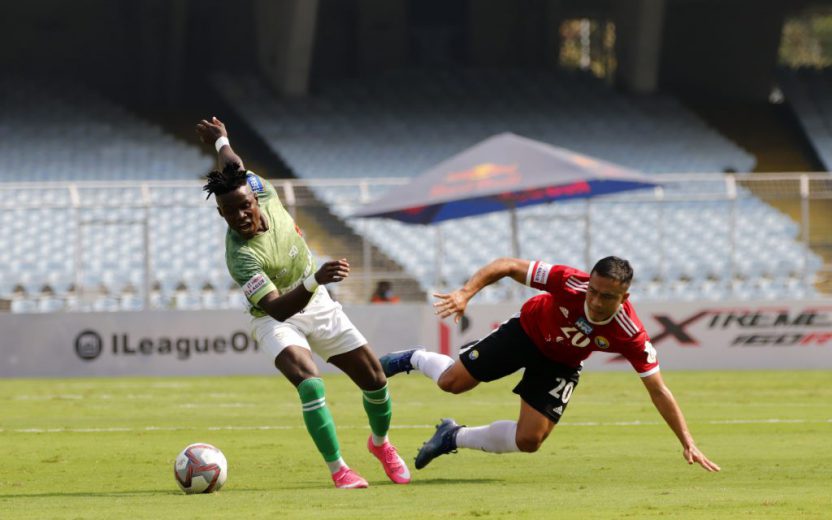 KOLKATA: Gokulam Kerala FC dropped two vital points in their quest for Hero I-League silverware as the Malabarians were held to a 1-1 draw by Real Kashmir FC at the VYBK Stadium in Kolkata, West Bengal today (March 15, 2021). Basit Ahmed Bhat’s first-half goal was cancelled by Dennis Antwi’s 24th-minute penalty kick as both teams shared the points. With this draw, Gokulam finds themselves two points adrift of league leaders Churchill Brothers as things stand, but could very well find themselves at third if TRAU wins their clash against RoundGlass Punjab FC.

In an end-to-end first half that saw multiple chances for both sides, it was Real Kashmir FC that attacked first. The urgency to snatch points from Gokulam Kerala FC could be seen in the Snow Leopards’ game as they adopted a highly aggressive stance in the opening minutes of the clash. As early as the 5th minute, the Snow Leopards could have gone ahead when a corner by Lalrindika Ralte was headed inches wide of the goal by Lukman Adefemi.

Raring to brush aside the woes that saw them drop points in their last two matches, Real Kashmir FC played a high line and pressed from the front. That strategy reaped rewards in the 13th minute when goalkeeper Ubaid CK took too much time to clear his lines. Basit Ahmed Bhat applied pressure and pounced on the chance as Ubaid was clearing the ball. The ball ricocheted off Basit’s left foot and went inside the goal to hand the Snow Leopards a 1-0 lead.

In the 22nd minute, midfielder Pratesh Shirodkar, who was proving to be a live-wire in the middle of the park unleashed a venomous shot that went inches wide of the Malabarians’ goal. However, all did not go Real Kashmir’s way. In the 24th minute, a late tackle inside the penalty box on Dennis Antwi handed Gokulam Kerala FC a spot-kick.

Antwi confidently took the penalty kick and smashed home to make the scoreline read 1-1. Gokulam Kerala FC, spurred by the equalizer, attacked in hordes but for the majority were thwarted away by the Real Kashmir defence. In the 37th minute, perhaps the best chance of the match fell to Philip Adjah who had cut inside the box. With only the goalkeeper to beat, Adjah skewed his shot wide of the goal as the Snow Leopards survived.

After the half-time scoreline read 1-1, Gokulam Kerala FC upped the ante and went for the kill, playing their usual style of possession-based football, while creating multiple chances.

Although Gokulam dominated possession, clear chances to score goals were rare as the Snow Leopards defended with acumen. However, in the 62nd minute, Gokulam came agonizingly close to taking the lead. Deepak Devrani’s header off a corner kick rattled the crossbar and came back into play as their opponents survived. The very next minute, Devrani almost gifted Real Kashmir a goal. Haroon Amiri applied pressure and robbed the ball off him in the defensive third. With the goalkeeper off his line, Amiri tried to chip the ball into the net, his effort however went inches over the bar.

In the 72nd minute, Real Kashmir once again came close to taking the lead when Pratesh Shirodkar’s shot from distance was headed off the goal-line by a well-positioned Naocha Singh.

Meanwhile, Gokulam Kerala FC were pinned to their half by a barrage of Real Kashmir attacks in the dying embers of the match. The Malabarians tried to play on the counter but were often left reeling as Dennis Antwi was unable to find space to make those darting runs.

Half chances for both teams in the final few minutes of the second half were wasted and at the end of the game, the scoreline read 1-1. With his draw, Real Kashmir are mathematically out of the title race while Gokulam will have to hope that their title rivals also drop points in the coming games today.