KOLKATA: The Indian Arrows face a tough test of credentials when the young turks clash against Aizawl FC at the Kishore Bharati Krirangan (KBK) in Kolkata, West Bengal tomorrow (March 16, 2021). The kick-off is slated for 2:00 PM IST and the match will be broadcast on 1Sports, whilst being streamed on their Facebook page.

The All India Football Federation’s developmental side, the Indian Arrows, have showcased some eye-catching performances in the Hero I-League this season. The y have played with style and panache during the season, aiding them in their development. Although their last match ended in a loss to Chennai City FC, the Arrows would aim to once again rekindle their flame and give Aizawl FC a run for their money.

Speaking at the virtual pre-match meet, assistant coach Mahesh Gawali said, “It is the second last match of the Hero I-league for us. The boys are motivated and positive for tomorrow’s match. They are ready for the game.”

“I think everyone knows that this is the first season for the majority of the boys in the team. After 12 matches in the Hero I-League, the boys know where they stand and they have gained a lot of experience. As you know Indian Arrows is a long-term project and is a part of the preparation of AFC U-19 qualifiers.”

“Aizawl is a very good team and they play some quality football. They keep the ball on the ground. It will be difficult for us because they have won the last two matches. My boys know what their roles and responsibilities are and we are ready,” he added.

Midfielder Shreyas Ketkar said, “Our team is positive and confident because we have played against them earlier in the season. We have the experience of playing against them and that will help. My experience in the Hero I-League has been very good. We have had a wonderful exposure playing for Indian Arrows in the Hero I-League because at a young age we have played against some big teams with some good foreign players,” he added. 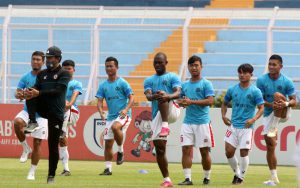 With safety from relegation assured, Aizawl FC will aim to continue their winning streak and look to exact revenge as the previous match between the two sides ended in a 1-1 draw courtesy of a last-minute goal by Sajad Hussain of Indian Arrows.

Speaking at the official pre-match press conference, Aizawl FC head coach Yan Law said, “Every game is important, every point is important for us and just because we are safe doesn’t mean that we are going to take it easy. We have to pick up all possible points in our next two fixtures. We want to end the season with more points than the super six.”

“Indian Arrows are a young and fantastic bunch of boys who are individually very good. They are collectively and tactically sound. It will be a tough game, the last time we played them it was a draw. They have defeated NEROCA and Mohammedan SC as an organized team. I hope we will go out on top and pick up three points.”

“We will look to dominate what we have been doing in the last few matches. It is a matter of pride and prestige for us because we were held for a draw by them last time. We have to pick up all possible points and make the fans happy.” Law added.

Lalliansanga who was also present at the press conference said, “Our last two matches are very important. Both the teams are very good and we are training very hard. We want to win anyhow and I think that is why we are safe from relegation.”