A feisty day of football where the semi-finals of the Football Delhi 2nd division I-League Qualifiers was played. Delhi FC and Indian Air Force have booked their place in the finals after securing big wins.

The first clash of the day was between Delhi FC and Royal Rangers FC, where Delhi FC clearly dominated the first half where they scored four goals in which Delhi FC’s striker Ekom Philips scored an incredible hattrick which helped his team; to win the game by 5-3!

In the second half, Royal Rangers decided to fight back and scored three goals in the first 30 mins of the second half, but a late goal by Dawda Ceesay in the 75th minute ensured Delhi FC’s triumph over Rangers. One of the most exciting and tight games of the tournament, where both the teams were at par and scored two goals. The game was abandoned yesterday due to heavy rain and was resumed today with Air Force leading 2-0. Garhwal started today’s game with a penalty goal in the 68th minute.

Garhwal looked the better side today, but it wasn’t enough to score 3 goals against a solid Indian Air Force defence. The game ended as a draw and went into penalties. In penalties, goalkeeper Shibinraj  Kunniyil saved the day for Indian Air Force, and they won the penalties by 7-6. Hard luck for Garhwal! 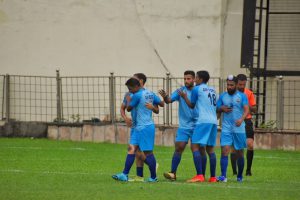