The 22-year-old midfielder from Mumbai is currently playing at Chennai City FC for a consecutive second year. Varun Mathur had his humble beginnings representing his school team and playing for junior teams until he got his breakthrough at a German based football club when he was 18-years-old.

Varun went up and close with FootballCounter to share his experience as a professional footballer plying his trade for Kenkre FC, DSK Shivajians, SportBund DJK Resenheim, FC Goa Reserves and Chennai City FC. 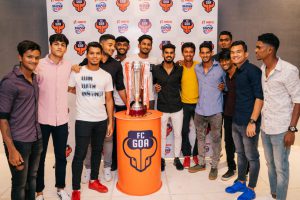 Here are the EXCERPTS:

Tell us about your initial days of pursuing football?

Varun: I studied at St. Mary’s Mumbai. Back in the day, most of my school friends started training at Kenkre FC junior teams. So my parents put me into the team as well. My initial career commenced at Kenkre playing for its U-7, U-9 and U-10 teams. When I was 10 years old, I shifted to Tamil Nadu, Coimbatore for Boarding school. Since then, for the next few years, I was in Coimbatore.

How was your time spent at Coimbatore? Did you get enough opportunities to play?

Varun: I didn’t have any formal coaching at Coimbatore but I was part of the school team. After finishing my schooling at age 16, I got an opportunity to play the U-16 I-League with DSK Shivajians. I came back to Mumbai, and there was a trial being conducted at the Cooperage Stadium. Around 4,000 aspirants took part in the trials for 3 days, and I was one of the players to get selected for the opportunity.

Tell us a bit about your international exposure in Germany

Varun: After playing half a season at DSK Shivajians, I received an opportunity in a 3rd Division U-19 Bundesliga team named SportBund DJK Rosenheim. I flew to Germany and played half a season as an attacking midfielder and scored 3 goals from 6 matches. I trained at their academy for the next one year and then came back to India in 2017.

How was it playing in India after your international experience?

Varun: I came back to India in 2017 and started to play for FC Goa Reserves in the 2nd Division League. I trained with the main team but didn’t have the opportunity to represent them. Then I signed for Chennai City FC in the I-League and have been playing there for the past two years now.

How different is the I-League this year compared to the previous edition?

Varun: From game perspective, the quality has dropped a bit in my opinion. There are lesser foreigners due to the pandemic. There are financial constraints for the clubs as well and they are finding it hard to invest big amounts in players. However, many younger players are receiving opportunities to play which is a good sign. The league is also providing a good platform for youngsters to prove their mettle, hence it’s a good pathway for Indian football.

What are the challenges for footballers to play during the pandemic?

Varun: Of course, it’s very difficult. The pandemic has taken a toll on the player’s mental well being. I tested positive for COVID during the initial days of the lockdown. My fitness levels dropped 30-40% and it was very tough to get back on track. After that, we regrouped in Chennai, and it was difficult for us. The club management took several initiatives for us to get back in shape and it worked out well. Initially, it became a challenge because nobody was allowed to step out of their rooms. We had regular COVID tests happening. During the starting days of the I-League, 2-3 staff members tested positive and were not allowed to step out from their rooms for a long time. CCFC has taken various initiatives for our mental well-being. Our management organized various activities like Yoga sessions in the morning for one hour, gym sessions and they have finally given us the freedom to meet our teammates. This edition is one of the most difficult seasons in Indian football.

How difficult is to be under a bio-bubble and then play at empty stadiums?

Varun: I wouldn’t term it to be difficult. I would say, the experience is very different. Fans are an important stakeholder of any sport, and them coming to the stadiums to cheer for their favourite teams does have a huge impact. Without the fans, it feels like I have gone back to my school days, where we’re competing against each other and there’s no one present to motivate us.

What are your thoughts about the current situation of Mumbai football?

Varun: One of the biggest challenges in Mumbai and Indian football is age-fraud. It’s tough to find real talents if this continues. Also the closure of many clubs like Mahindra United, Mumbai FC have made things tougher for Mumbaikars. We don’t have any team from Mumbai representing in the I-League and have only MDFA Elite Teams to play at. The MDFA Elite teams are quite good, but they have their own set of problems like finding a ground to conduct sessions. When I came back from Germany, initially, I couldn’t find any club. Kenkre took me back, and I got the opportunity to play for them once again. I’m thankful to Mr Joshua Lewis for giving me that chance to be in practice and have the required game time.