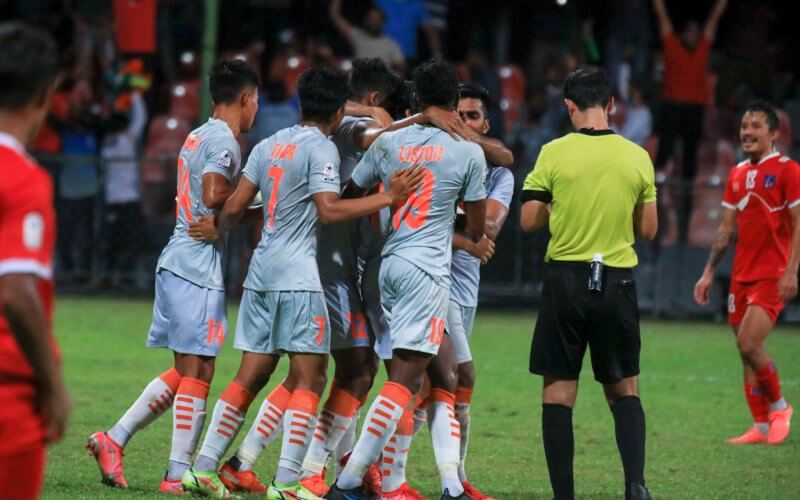 A late strike by Sunil Chhetri handed India the 1-0 win over Nepal in the SAFF Championship 2021 Group Stage, at the National Football Stadium in Male, Maldives, on Sunday, October 10, 2021.

With this win, India are now in the third spot on the Group table with five points, just one behind Maldives and Nepal, both of whom have acquired six points each.

India started off on the front foot, winning their first corner of the match as early as in the third minute. The Nepali defence was up to the task though, as they cleared the ball that was swung in by Brandon Fernandes.

An interesting battle ensued between the two captains, Sunil Chhetri and Kiran Kumar Limbu in the opening exchanges. India constantly tried to feed the ball to Chhetri on multiple occasions, but Limbu stepped out as well, to nip the chances in time.

A little under the 20-minute mark, Chhetri managed to control an aerial ball inside the box, and got his shot away, but he was shepherded to a tight angle by the defence and Limbu managed to parry it away.

India had launched most of their attacks down the right-wing, but as the clock neared the half-hour mark, Suresh found Brandon on the left with a cross-field switch over. The midfielder turned a defender, cut inside, and unleashed a shot, which went wide.

India had their best chance of the first half in the 34th minute, when Suresh was fed through inside the box by Pritam Kotal. The midfielder flashed a low cross across goal to Chhetri, who was waiting unmarked at the far post. However, a slight touch by Limbu scuppered the chance, as the India captain’s eventual shot went agonisingly wide.

With two minutes of regulation time in the first half left, Chhetri created another chance, when he nodded a Suresh cross into the path of Manvir Singh, who tried to control the ball, but was muscled off it, as the two teams went into the break with the score still remaining 0-0.

The Blue Tigers continued much in the same vein in the second half, passing the ball around the park and looking to prise open the Nepal defence. They earned a free kick just outside the penalty box, 10 minutes into the second half. Brandon Fernandes, who took the free-kick, sent it inches over the bar.

Manvir Singh had another chance, this time off a cross by Yasir, as the forward produced a textbook header, hard into the ground, but Nepal captain Kiran Limbu again produced a diving save. That was the last piece of action for Manvir, who was replaced by Udanta Singh, while Anirudh Thapa came on for Suresh Wangjam.

Yasir soon cut inside from the right and unleashed a vicious long ranger, but it went wide. Soon after, he was replaced by Farukh Chaudhury, while Liston Colaco came on for Mandar Rao Dessai.

Subhasish had a brilliant opportunity to snatch the lead, when Chhetri’s header off a Brandon set-piece fell to Subhasish, who sent in a powerful header, but it was straight into Linbu’s torso.

Brandon’s set-pieces were a menace as Chhetri broke free of his marker and managed to get a free header onto another of the midfielder’s corners, but his header that was directed to the ground, went over.

With eight minutes of regulation time left on the clock, it was none other than captain Sunil Chhetri, who broke the deadlock. Substitute Farukh Choudhary headed an aerial through ball by Brandon onto Chhetri’s path, as the India captain volleyed it home with his left foot.

India having scored a late first goal, Nepal mounted on the attacks, looking for the equaliser. Anjan Bista managed to penetrate the box and got his shot away with a few minutes of regulation time to go, but it failed to trouble India goalkeeper Gurpreet Singh Sandhu.

Soon after Ayush Ghalan looked to find some space for his teammates with a dangerous cross, but Gurpreet came out of his line and collected it calmly. India saw off the late charge by Nepal as the three minutes of injury time came to a close, and the referee blew the long whistle, signalling the end of the game.

The Blue Tigers will play their final Group Stage game against hosts Maldives on Wednesday, October 13, 2021, at the same venue. The match kicks off at 9.30 PM IST.