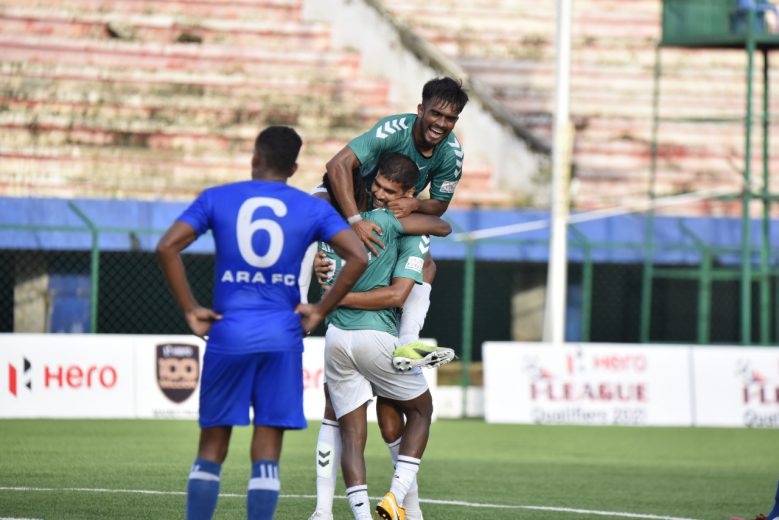 A dream run for Kenkre FC as they won their second consecutive game today of the I-League Qualifiers against ARA FC.

All thanks to goals from Azfar Noorani in the 14th minute and Yash Mhatre’s strike in the 67thminute that ensured Kenkre FC’s successive wins in Pool B.

With this win, Kenkre FC has ended ARA FC’s hopes of making it to the Hero I-League. ARA FC is now at the bottom of the Group-B table; they started their campaign with a 1-1 draw against debutants Corbett FC and, in their second clash, they lost by three goals to nil to Delhi FC.

Although ARA FC had a great start in the match, Kenkre turned the tables on the 14th minute when Ranjit Singh Pandre made a perfect cross pass to Azfar Noorani, who then shot the ball with accuracy into the net, leaving no chance for the ARA FC goalkeeper Shubham Rajeshkumar Chauhan to stop the ball.

Just before the first-half whistle, ARA created a fantastic chance when Rana gave an exceptional pass to Saurabh Maheshwari. Still, ultimately Maheshwari couldn’t convert it as Kenkre’s goalie Tenzin was at his best. The first half ended 1-0 in Kenkre’s favour.

In the second half, even though ARA had more control on possession, Kenkre’s discipline to convert the chances they get helped to net the ball again on the 67thminute. Substitute midfielder Yash Mhatre scored the goal.

After Kenkre’s second goal, ARA immediately started to create chances and dominate the game, which helped them score a goal in the 70th minute by Dahir Bala Alhassan.

ARA tried hard to make a comeback, and created a lot of chances till the very last minute but it wasn’t just enough to stop Kenkre from taking away 3 points home!