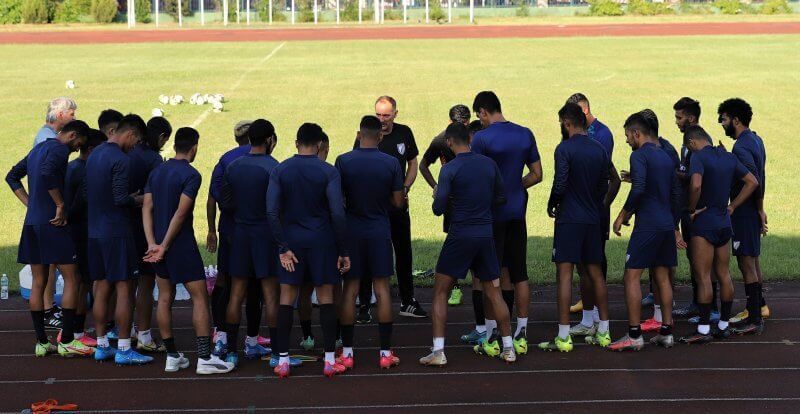 The Indian Men’s Senior National Team landed safely in the Maldives today (September 28, 2021) for the forthcoming SAFF Championship which kicks off from October 1 onwards.

The 23-member squad along with the support staff traveled from Bengaluru where all had assembled the previous day. Head Coach Igor Stimac has joined the squad directly in the Maldives. India begin their campaign against Bangladesh on October 4.

“The boys are excited and we expect them to do well and go all the way through winning the tournament,” Head Coach Igor Stimac stated. “For some of them, it is going to be a bit more difficult to shine as their clubs still haven’t started the pre-season yet. But we are very confident that each one of them will give their best,” he added.

“It feels great to be here. It’s truly an extraordinary effort that has been put in. Given the current situation, it’s extremely difficult to organize matches, leave aside an entire tournament. I wish the entire organizing committee, the Maldives FA, and the Government of the Maldives all the very best for the Championship. I understand it’s a humongous task, and hope everyone stays safe for us to have a cracker of a tournament,” Sunil averred.

Midfielder Brandon Fernandes expressed that “there will be some tough matches in the next two weeks.”

“Since my childhood, I have heard so many anecdotes about the SAFF Championship. Hence, it’s a different feeling for me to be in the squad for this edition. We understand that the next two weeks will be extremely tough and there will be some very close matches. The entire squad is up to the challenge,” he maintained.

The Blue Tigers will be inside a secured bio bubble all throughout the tournament, and the first training session is scheduled for Wednesday (September 29, 2021). The weather forecast predicts cloudy skies with isolated thunderstorms for the next few days.

Following are India’s fixtures in the group stage:

The 23-member Indian squad is as follows: