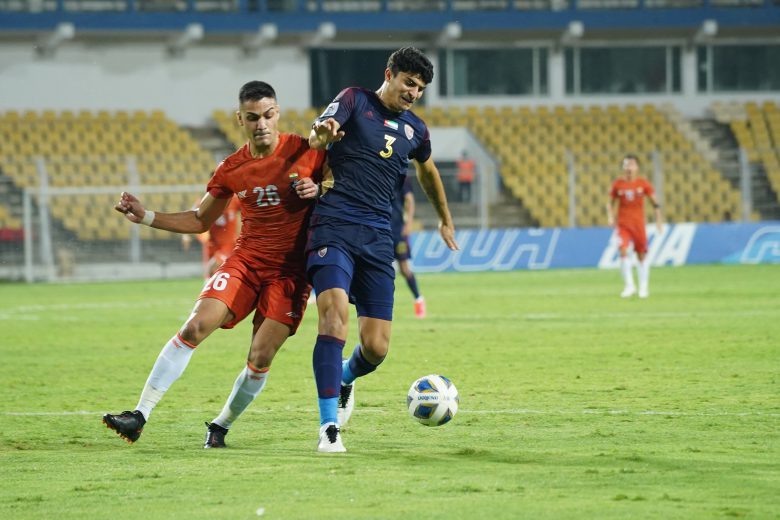 Goa, April 29, 2021: A depleted FC Goa side were beaten 0-2 by Al Wahda in their final AFC Champions League match tonight at the Pandit Jawaharlal Nehru Stadium in Fatorda, Goa. Owing to a concerning COVID-19 situation, FC Goa were without the services of all their foreign players as well as head coach Juan Ferrando.

The result means that the Gaurs finished third in Group E in their maiden appearance in the tournament thanks to three points owing to three draws.

The foreign contingent were all forced to leave for their native Spain abruptly, which saw eleven Indian players take the pitch for the first time in AFC Champions League history. It was a great opportunity for all the players involved, but when the opening whistle blew, it became clear that the team was more than willing to put up a real fight.

Al Wahda, coming into the game at the back of three successive wins were full of confidence, and bombarded the Goan penalty area with bodies in the first half, leading to a host of decent chances.

Lucas Pimenta fashioned the first really big opportunity just short of the 15-minute mark following a corner, but his tame effort was easy for Dheeraj Singh to deal with in the Goa goal.

Omar Khribin was growing into the game, and he managed two good chances back to back. First in the 26th minute, his effort just went wide off his left boot, and then with a well timed header just three minutes later, he created another opportunity that needed to be saved by a diving Dheeraj Singh in the FC Goa goal.

Tim Matavz was the main man up front for the Emiratis, and he had a good chance of his own just after the half hour mark, but despite finding himself one-on-one with Dheeraj, the striker fired his shot over the bar.

The Gaurs did manage one decent chance of their own in the first half, which came following a free kick that was only partially dealt with by Al Wahda custodian Mohamed Al Shamsi.

The follow up shot came to Glan Martins, but Al Shamsi was sharp enough to block the effort from the all-action midfielder. Goa kept out the visitors for the rest of the half with some dogged defending in their own penalty area, and knew they were in for a war come the second period.

More of the same came the home side’s way once the second half began, but Dheeraj was proving to be the difference between the two sides.

The talented goalkeeper first denied Khalil Ibrahim in the 49th minute from point blank range, and then made perhaps the best save of the tournament yet just a few minutes later.

Omar Khribin was played in and found himself one-on-one with an on-rushing Dheeraj, and as the Syrian tried to chip the keeper, Dheeraj clawed the ball away with a brilliant right hand to deny him.

Khribin did have the last laugh, however, as he got his goal in the 61st minute of the game. The forward was found inside the penalty area by Tim Matavz, and this time he smashed the ball home to make it 0-1 to Al Wahda.

Despite a stiff resistance posed by the Gaurs the rest of the way, Al Wahda got their second goal in the 90th minute as captain Mohammed Barqesh Almenhali made the Gaurs pay for a mistake in possession, his shot deflecting off Adil Khan and finding the back of the net.

In the end, the side from the UAE did see out the game comfortably, grabbing the three points and moving up to 13 points in Group E. This should be enough to see them qualify for the round of 16 behind group winners Persepolis FC who finished with 15 points.

As for FC Goa, they finished with 3 points after three fighting draws, and crucially finished third, avoiding the wooden spoon in the group which went to Al Rayyan.

The AFC Champions League was a memorable tournament for FC Goa in the end, and an opportunity for some youngsters to play in the biggest continental competition in Asia, with a performance that proved the Men in Orange can hold their own among the elite.

eTigers ready to battle for spot on the ‘main stage’ at FIFAe Nations Online Qualifiers
Is the new roadmap a solution for the future?