A tribute taking a state forward — the story of Kuppuraj FC 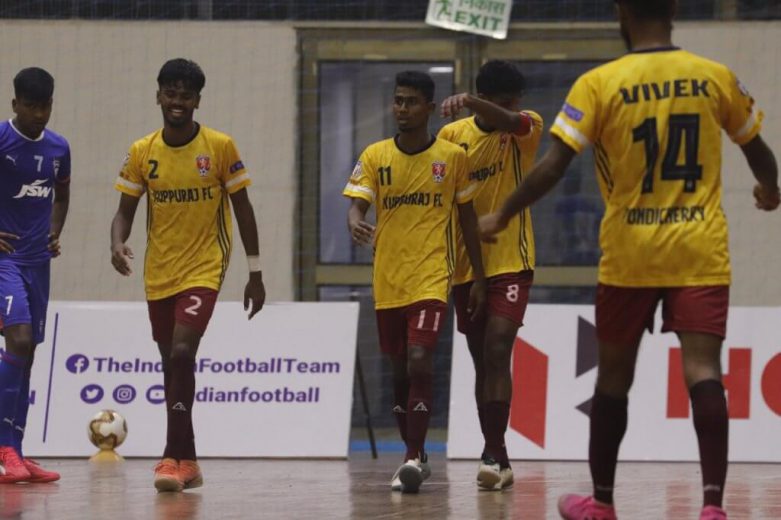 One of the talking points in the inaugural edition of the Hero Futsal Club Championship has been Puducherry club Kuppuraj FC. The club even scripted their own fairy tale story when they accounted for JSW Bengaluru FC 3-2 in a group league match.

“We do not have strong roots in the history of football, but as an instructor in futsal, I believe that if you develop futsal at the grassroots level with a perfect environment and coaching, it can be a strong base for futsal and football as well,” Coach Veerababu Sivaneni stated.

The club was founded by Mr. Sugumaran as a tribute to his late father — Mr. Kuppuraj who was a former footballer, and as Veerababu informed, the “focus was to develop an environment where all-round football development could take place.”

“The most encouraging part is that many clubs and schools have initiated futsal in our city. We hope that in a couple of years, we will get more players from the grassroots, and that they will develop the habit of playing with less space and less time on the ball,” Veeranabu maintained.

“The Hero Futsal Club Championship has been the best platform for the players to showcase their talent. The matches are being telecast and I am optimistic that any scout watching will take note of the talent on display,” the coach added.

Speaking about his current team, Veerababu had an inspiring story to share. “The players that have been brought here have come from remote areas. It is a very talented bunch, and most of them come from very humble backgrounds.” averred Sivaneni.

The coach also had some special praise reserved for the State Association. “Once our State FA started the futsal leagues, it provided an opportunity for every club to register and play in an official tournament, in an indoor stadium and as per the official rules.”

“Prior to that most had played mostly on a badminton or tennis courts. The players have worked very hard in the build-up to the tournament, and they have given their best on the pitch,” Veerababu expressed.

“Mr. Krishnamoorthy, the State vice president is an able administrator and understands the significance of taking futsal to the kids. He has been one of our main pillars.”