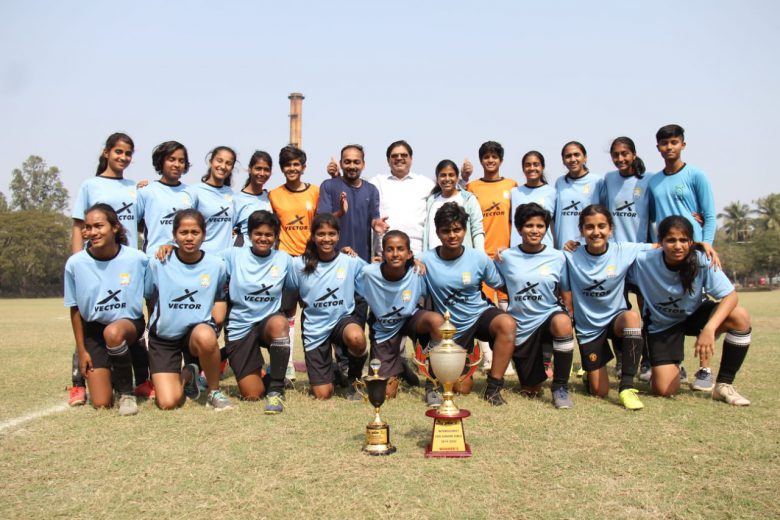 Palghar was opted as the venue for a week long Inter District tournament (6th-11th of January) for the junior girls football teams in Maharashtra.  After a series of group stage games and knockouts, Mumbai and Pune made it to the finals of the competition.

In a game of two halves, Pune seemed dominant from the kick off. Both the teams failed to score after creating aplenty chances. The first half ended as a goalless affair. In the second half, Pune got the better off Mumbai. Pune’s Zahra Unwala scored at the 32nd minute to break the deadlock. Trailing by a goal, Mumbai put efforts to bounce back into the game. Eventually, as it stood, Zahra’s only goal happened to be enough for Pune to clinch the coveted trophy.

Anjali Barke of Pune District and Jahnavi Shetty of Mumbai District were awarded the best goalkeeper and player of the tournament respectively.

During the felicitation ceremony, Mr Souter Vaz (Hon. Secretary of WIFA and Vice President of MDFA) reassured how football in Maharashtra is improving for both the men and women teams. He also talked about the recent achievements of the Maharashtra U-18 team at the Dr BC Roy Trophy held at Mandi, Himachal Pradesh. Further, Mr Vaz applauded the Palghar District Football Association for their esteemed efforts in organizing the tournament.

Mr Pyarelal Choudhary (Hon. Treasurer and Vice President of Pune District Football Association) extended his gratitude towards the winning side. “I’m happy about Pune’s victory, but it doesn’t matter to me whether Pune or Mumbai wins. I and Souter Vaz only care about Maharashtra as a whole. I can affirm after looking at our players, football in Maharashtra is rising and it has the potential to reach newer heights in the coming time.” claimed Mr Choudhary.

Mr Dharmesh Gohel, the Secretary of the Palghar District Football Association and an executive member of JSW,  mentioned how overwhelmed they were with the opportunity to host the Inter District competition. He also emphasized on JSW’s approach to uplift sports in the state and the country. “It’s our dream to provide the suitable facilities to our athletes and to enhance their performance. We have already built such an infrastructure in the state of Karnataka, renowned as  the Inspire Institute of Sports. Alongside several other activities, The IIS is helping prepare the athletes for the Tokyo Olympics 2020. Similarly, we are working with the smaller districts in Maharashtra. Here at Palghar, we’re planning to start new projects to provide facilities for our current and future athletes.” quipped Mr Gohel. He reiterated Mr Parth Jindal’s (Managing Director of JSW Sports, Chairman of IPL based Delhi Dynamos) affection and investment in the development of sports in the country!