We want to surprise the world, Precious Dede tells FIFA 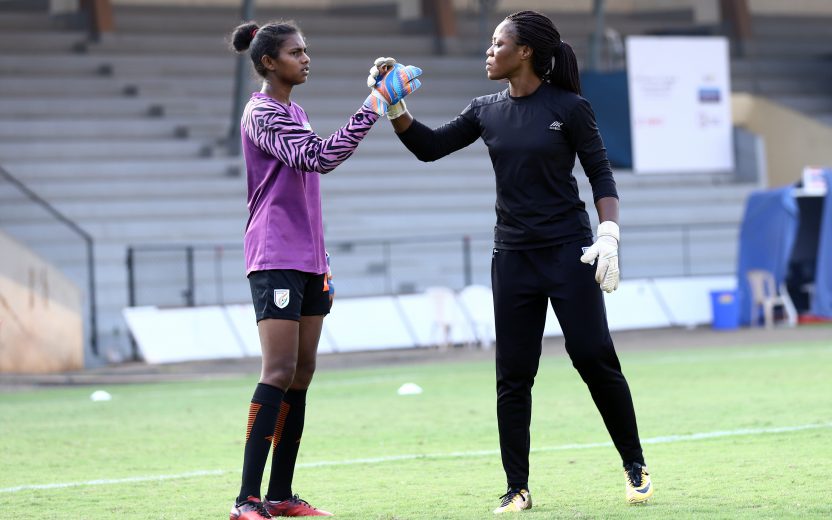 ‘You can’t be what you can’t see’ has become something of a mantra in women’s football. And amid this ever-growing appreciation of the importance of visible role models, India’s aspiring female goalkeepers find themselves in an enviable position.

After all, in every training session ahead of this year’s FIFA U-17 Women’s World Cup, these youngsters are being guided by one of their position’s all-time greats. They all know that, when Precious Dede speaks, each word reflects the lessons of a career spent amid the elite.

“The girls know what I’ve done and they look up to me a lot,” Dede told FIFA.com. “I can see them paying really close attention when I work with them, and it helps that I can still step on the pitch and show them how certain things should be done.

“Even when I was still playing, I knew that I wanted to become a coach. And not just a coach – a goalkeeping coach. I get a lot of joy from seeing good goalkeeping, and from seeing young keepers develop.”

If eyebrows were raised at this latest chapter in Dede’s glittering career, it was not due to the nature of her role – but its location. Most observers had assumed that, as a Nigeria legend – and having taken her first steps in coaching with the country’s senior team and U-20s – she would continue grooming the Super Falcons of the future.

Instead, the 40-year-old opted to embrace a daunting challenge in an unfamiliar culture. As she explained: “Lots of people asked me, ‘Why are you going to India? It’s not a football country.’ But I told them that I was coming here to prove a point because, with this U-17 World Cup, we are working towards a goal. And we want to surprise the world.

“It’s not all been easy, of course, because it’s a new environment for me and the culture and food are very different. But the Indian people are so warm and receptive, and the players – because they have the right attitude and willingness to learn – are developing very fast. Each one of them is a work in progress – but it’s clear the talent is there.”

The job has also presented the opportunity to reconnect with a coach, and man, for whom she has the utmost respect. “It was a very nice surprise to get the call from Thomas [Dennerby] asking me to do this job,” she explained. “The fact he picked me is a big compliment and it makes me very happy because to me, he is not just a coach or a boss or a mentor. He’s like a father. I have learnt so much from him on and off the field.”

The appointments of Dennerby and Dede – two heavyweights of the women’s game – reflect India’s ambitions for this U-17 Women’s World Cup, and for football’s wider development. For Dede, witnessing the vast potential of this colossal nation and the strides being taken across the world, the future seems extremely bright.

“Women’s football is developing very fast, and it’s great to see,” she said. “When I came through, it was very, very tough for a girl to start playing the game. There were so many barriers, particularly in certain parts of the world.

“But minds are opening now. Even in more ‘traditional’ countries, it’s becoming easier for girls to say to their parents, ‘I want to play football’. And I think the players in my generation have helped pave the way for that. Unlike us, girls nowadays can now look around at women players who have achieved a lot and say, ‘I want to be like her’.”

In other words, they can be it because they have seen it.