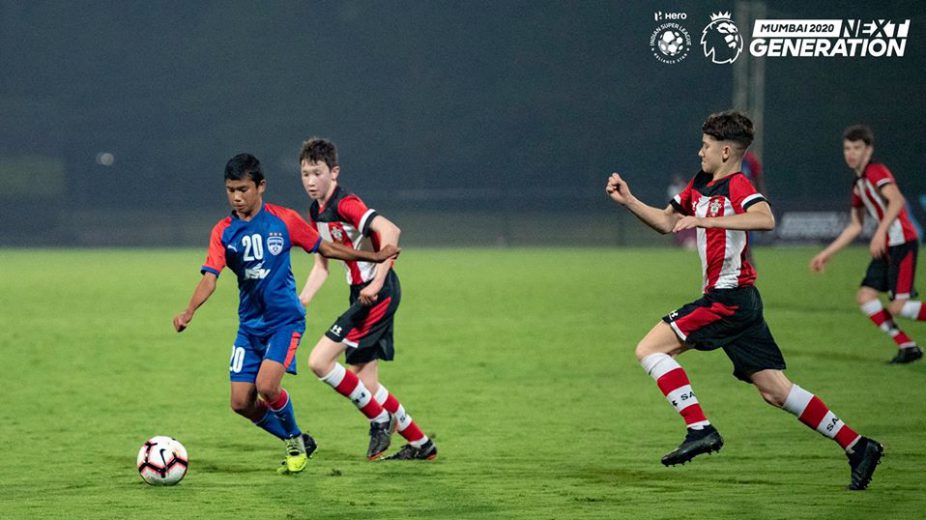 Day One of the PL-ISL Next Generation Mumbai Cup 2020 culminated with Bengaluru FC’s 1-1 draw against Southampton FC Under 14s here at the Reliance Corporate Park Football Ground, Navi Mumbai today.

The Blue Colts cancelled out the English side’s opener in the first half followed by some hard-fought football on display by both teams.

The kids from Bengaluru seemed to relish the prospect of coming up against the ‘Young Saints’. They pegged Southampton FC youngsters back for a considerable period of time in the early phases of the game. Lalhminchhuanaga, the energetic midfielder had a vital role to play in it.

Overall, Bengaluru’s players were relentless with their work-rate, chasing the opponent hard whenever they lost the ball. Left-back Ashik Adhikari put in crunching challenges and he followed suit with some timely tackles that garnered roaring applause from the audience.

Yet, Southampton midfielder Joseph required one loose opportunity to curl the ball into the back of the net from nearly 25-yards away to hand his side the lead. Merely four minutes later though, Bengaluru struck back as Monirul Molla leapt the highest and clawed his team’s way back into this game.

The sheer enthusiasm and concentration demonstrated by the Bengaluru boys was laudable. They hardly provided Southampton’s young guns any clear, concise chances to double their lead. Rajanbir Singh led the backline with authority as he regularly carried the ball forward whenever an opportunity arose.