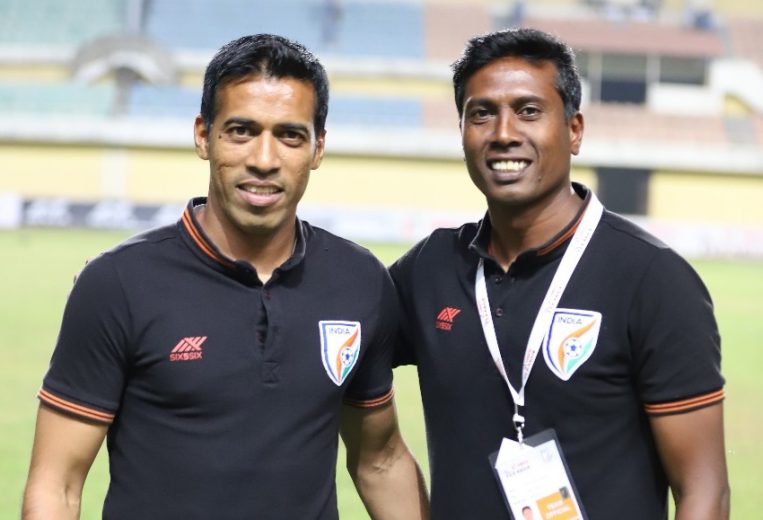 The full-time whistle blew as the Indian Arrows vanquished Churchill Brothers to record their first win of the Hero I-League 2019-20 season. On the touchline, Head Coach Venkatesh Shanmugham and Assistant Coach Mahesh Gawli sported wide smiles as they joined in the celebrations. For the duo who have both enjoyed decorated playing careers and celebrated a multitude of trophies and triumphs together, this victory at the Fatorda Stadium was special — marking their first win since joining forces to take charge of the Arrows.

“Mahesh and I have been together from our India U-19 days,” Venkatesh told the-aiff.com. “We played age-group level together, at club level as well and then for the India senior team for almost a decade,” he continued.

Venkatesh was named the Head Coach of the Indian Arrows prior to the start of the season and is also the Assistant Coach of the Indian senior side. He talked about his relationship with Mahesh, while hailing him as one of India’s “finest-ever” defenders.

He said: “Everyone knows that he is among the finest defenders ever that India has seen. There really hasn’t been any other player like him. He has played at the top level for so many years and his knowledge of football is brilliant. He is supremely disciplined as well and a great role model for aspiring pros. We were very good friends when we were players and are comfortable with one another, which is a plus point for us.”

Mahesh shared his thoughts on Venkatesh as well — about his qualities on the pitch and how the two worked in tandem for both club and country. “Venkatesh was a highly creative midfielder and a very good dribbler. He was cool and composed, and also very sharp. His work rate was brilliant and he covered ground up and down the pitch very well, which was great for the team and for me as well, being a defender,” he expressed.

According to Mahesh, his best memories with Venkatesh are from the time they played together at Mahindra United FC, including the incredible 2005-06 season where they lifted the National Football League Title along with the IFA Shield, Federation Cup and Mumbai Football League — a feat that stands out as among the greatest in the annals of Indian football history.

Going down memory lane, Venkatesh said, “I consider that Mahindra side to be one of the best teams in Indian football. That year was an enjoyable one as we won all the trophies. We were a great bunch — we had some top Indian players who were in the National Team too and two great foreigners as well. We worked hard and gelled together really well, which is why we were successful.”

Both Venkatesh and Mahesh have been stalwarts for the Senior National team over the years, winning multiple trophies for the nation — which includes the 2005 SAFF crown in Pakistan and saw the duo play a major role in the title win. Mahesh observed that the “dedication” among the team members at the time was a standout feature.

“The atmosphere in the senior team in our team was really good and all of us were hard workers. We were dedicated and determined to do something great for the country and for ourselves as well, and it was that grit that took us where we wanted to go. All players were top-quality and were really strong as a bunch,” the centre-back recalled.

Having joined forces once again, both icons are keen to pass on their knowledge and experience to the next generation that will take the baton forward. While admitting that being a good player and coach requires different skill-sets, Venkatesh stressed on the importance of inculcating a “winning mentality” in the Arrows players — something he and Mahesh have cultivated over the years.

He stated, “Both of us have been part of winning sides and won trophies together. It has made us understand the importance of developing a winning mentality, which is something we want the boys to have as well.”

“Being a player and coach is quite different. As a coach, it is more important to have management and leadership skills, and one has to understand the individual attributes and characters of each player,” he added.

However, being a former player does have its unique advantages as well while taking charge on the touchline, according to Mahesh. He said, “The experience and knowledge are definitely there. Having been their shoes already, we practically know how to understand and react to certain situations. We understand the capacities and roles of players and know what we need to teach them.”