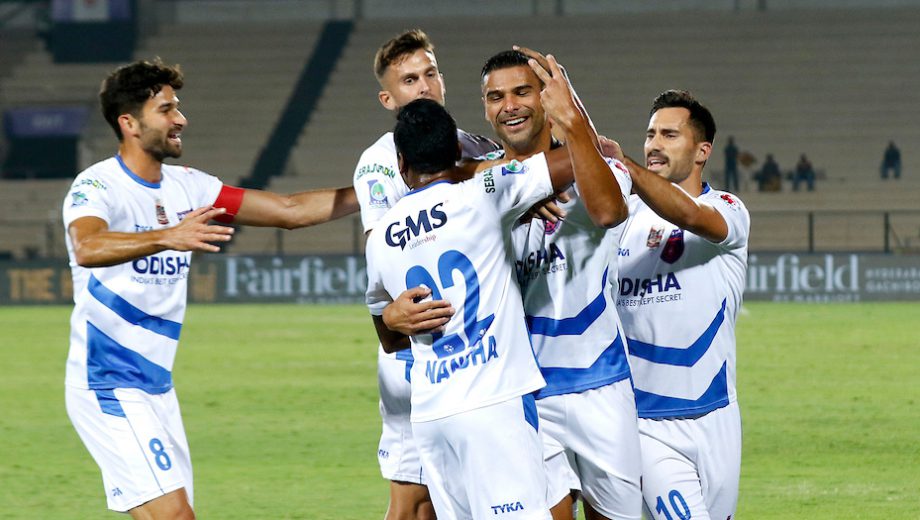 Odisha FC strengthened their playoff hopes with a 2-1 win against Hyderabad FC in a Hero Indian Super League clash at the GMC Balayogi Stadium here on Wednesday.

Marcelinho (1′) gave the hosts an early lead but Aridane Santana (15′, 45′) netted a brace to help the visitors complete a comeback. Thanks to their fourth win in a row, Odisha are fourth on the table with 21 points from 13 matches and a five-point advantage over fifth-placed Mumbai City, who have a game in hand. Hyderabad remain at the bottom with five points.

Hyderabad broke the deadlock within seconds from the start. The move started with Bobo playing a diagonal pass to Nestor Gordillo on the right flank. The Spanish winger crossed towards the far post for Nikhil Poojary who forced a save off Francisco Dorronsoro. The rebound fell perfectly for Marcelinho who tapped home the fastest goal of the ISL this season.

Odisha recovered from the early shock to take control of the midfield. Their first chance fell for Xisco Hernandez whose first-time strike from the edge of the box off Santana’s layoff flew wide of the goal.

The visitors soon found an equalizer, amidst total chaos inside the box. Shubham Sarangi’s long throw-in found Carlos Delgado inside the box whose shot was saved by the goalkeeper. The rebound was converted by Santana, with Dimple Bhagat picking up a yellow card for trying to stop the ball from going in with his hand.

The hosts were handed a gift when Nestor’s shot from inside the box hit Sarangi’s arm and the referee pointed at the spot. However, Bobo’s strike from 12 yards was kept out by Dorronsoro.

Odisha were awarded a penalty of their own at the other end before the break. Dimple Bhagat fouled Santana as the forward collected a cross and attempted to shoot, and as a result, the youngster picked up his second yellow card. The Spaniard converted the resultant penalty to make it 2-1.

Odisha nearly added a third soon after restart. After attempts on target from Jerry Mawihmingthanga and Santana were parried away by Kamaljit Singh and Asish Rai respectively, the loose ball fell to Vinit Rai whose curling strike from the edge of the box ricocheted off the frame of the goal.

Lalchhuanmawia Fanai and Daniel Lalhlimpuia saw their long-range strikes miss the target while Gordillo failed to test the keeper from distance at the other end as the game neared full-time. Dorronsoro produced a brilliant one-handed save to keep out Giles Barnes’ header from close-range at the end to secure a crucial win for Odisha.