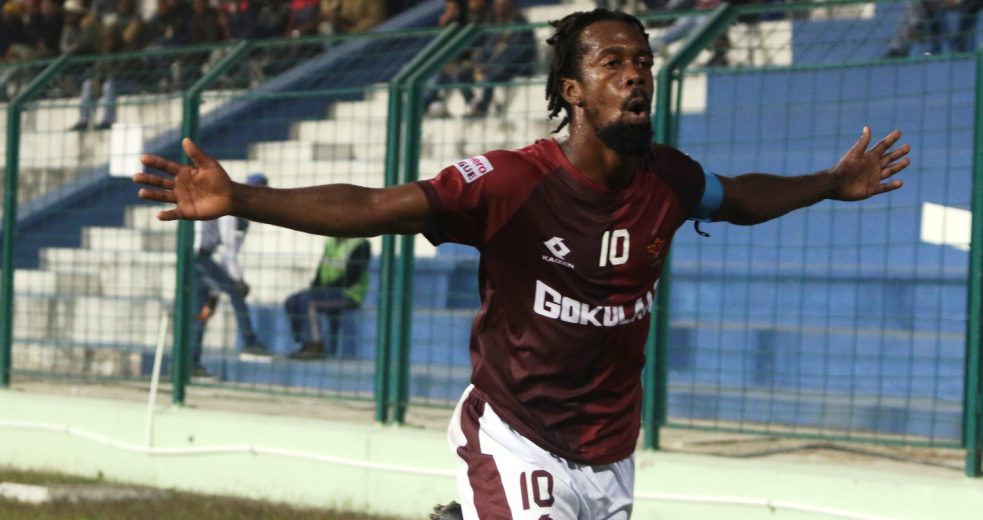 Gokulam Kerala FC put up a fabulous show in front of 9000-odd Red and Golds supporters by overwhelming Quess East Bengal 3-1, led by their charismatic Captain, Marcus Joseph at the Kalyani Municipal Stadium tonight (January 15, 2020). With this win, Gokulam Kerala FC ended their three-match winless run and have now risen up to the fourth spot in the points table with 10 points from six games.

Gokulam Kerala today entered the match with six new players in the starting line-up after facing two suspensions in the last match against Chennai City FC.  On the other hand, Alejandro Menendez, the Quess East Bengal gaffer made only two changes in the team that lost to Churchill Brothers FC Goa.

The match started on a very positive note for the home side as a thunderous left foot-long distance shot from Juan Mera Gonzalez was barely tipped by the Gokulam Kerala keeper as the ball hit the post go out for a corner in the 4th minute.

Juan Mera was looking in scintillating form as he was again in the thick of things with a ball into the box which was miscued by Andre Ettienne but there were no takers for the looping ball and the scoreline remained unscathed with thirteen minutes being played.

In spite of the early chances, the Quess East Bengal defence was looking shaky and soon a double save by the Quess East Bengal keeper saved the home team from a major scare. The relief was shortlived as in the 21st minute, Naocha Singh found Henry Kisekka free in the box with a perfect cutting pass. Kisekka faked a defender and netted home the first for the visitors.

The Red and Gold didn’t back down. A set-piece by the captain, Lalrindika Ralte from just outside the box found the header of Asheer Akhtar. Akhthar’s header, which ricocheted off the post, fell to Kassim Aidara who tapped the ball in to level the score in the 27th minute.

Red and Golds were now looking sharp but the fortune was short-lived, as a blunder by Marti Crespi in the dying moments of the half resulted in the Spaniard striking the ball into his own net.

The first half ended with the visitors going into the tunnel with a 1-goal advantage.

After the breather, Quess East Bengal were dominating possession in their quest for the equaliser but nothing was seeming to be working for the hosts.

Gokulam Kerala’s captain, Marcus Joseph, in the 56th minute, hammered from a distance straight at the keeper. Nine minutes later, it was Kisekka once again whose pass set Joseph free for Gokulam Kerala and the latter powerful shot was spilt by the keeper and on the rebound, the prolific striker didn’t make a mistake to put their third goal in.

Quess East Bengal, after the third goal, were looking a bit disarrayed and short of ideas and Gokulam Kerala saw it off until the final whistle to earn a well-deserved victory.

Marcus Joseph of Gokulam Kerala FC walked away with another Hero of the Match award for his exploits on the pitch.

Gokulam Kerala will now travel to Ludhiana to face Punjab FC on January 20, 2020 in their next fixture whereas Quess East Bengal will square off with cross-city rivals Mohun Bagan at the Saltlake Stadium on Sunday (January 19, 2020).