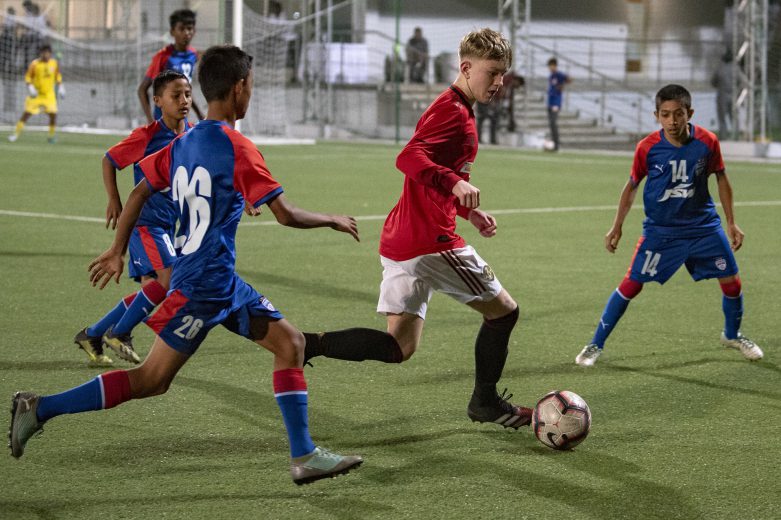 Manchester United FC’s Under 14s bounced back from a narrow defeat against Chelsea FC earlier in the day to register a dominant 5-1 win against the boys from Bengaluru FC in the PL-ISL Next Generation Mumbai Cup 2020 here at the Reliance Corporate Park Football Ground, Navi Mumbai today.

United were assertive from the offset, as Lewis Dean Forshaw scored an early goal in the fourth minute and thereby set the tone for the match. The Young Red Devils prolonged their dominance, with Jack Lee Moorhouse breaking no sweat and adding upon the lead a couple of minutes after Forshaw’s successful attempt at goal.

Forshaw, United’s captain, was specifically impressive throughout the game. Rajanbir Singh clawed his team back into the game with a powerful free-kick from near the halfway mark. United’s goalkeeper, Adam Berry, mishandled the shot and the ball crept its way into the net. However, the joy didn’t last long for the home team as Finley McAllister’s tap-in through a low-cross further aided his team to attain a firmer grip over the proceedings. United were relentless from thereon, as Louis Jackson nodded home a goal through a corner and pegged the opposition further back with respect to their hopes of initiating a comeback in the game.

The second half followed suit in terms of the pattern of play as Bengaluru were stifled in their own half and were unable to create many goal-scoring opportunities barring a couple of endeavours from Monirul Molla. United rounded off a convincingly credible outing with a late goal in the second half from Tomas Jones.