Leaving Engineering to become a Footballer: A tale of Ishan Sharma “In a society where engineering is everything, pursuing football over engineering was a huge risk in the opinion of many people. Honestly, I never saw it in the same light. I was determined and excited to follow my passion”, declares Ishan Sharma.

Growing up in Pune, Ishan was first introduced to the beautiful sport by his father at a tender age. Ishan’s parents were his first coach. “I remember kicking the ball around my father. I loved the feeling. Initially, I used to play many sports, and mom encouraged me to take up tennis more seriously. But I was devoted to playing football” says Ishan.

Studying at Army Public School, Pune, Ishan always had exposure to sports. He enrolled his name in the school football team when he was in grade VII. As Ishan reiterates, his initial motivation as a leader was amplified when his school made him the captain of their team. He won several accolades for them and competed against the best school teams in the city.

“My coaches at school focused more on our physical fitness instead of the regular ball practice sessions. Initially, those were tiresome but now I understand the impact it has had on my life. That training boosted my physical attributes. At a very small age, I was exposed to what leadership and discipline meant. I was the captain of my school team.” – Ishan Sharma

Completing his school, Ishan unwillingly opted Engineering as the way forward. While being committed to his course, soon Ishan realized he wanted something else. He was playing football simultaneously, but failed to balance academics and sports.

“I dreamt to play professional football and represent the national team since childhood. But due to the lack of infrastructure and awareness, I ended up pursuing engineering. I remember while I was doing my course, I would spend most of the time bettering myself on the football pitch.” – Ishan Sharma

In the end, Ishan’s heart triumphed his mind. He couldn’t bear staying away from chasing his dreams. Ishan was blessed to have supportive parents, who motivated his decision. “I am privileged to have the support of my family. It was my love for the sport that overpowered any other feeling and got me to choose football over anything else.” reminisced Ishan.

The limited opportunities in Indian football were always a challenge, but he was determined to make a name for himself. Ishan took up the new challenge with vigour and left no stone unturned since Day 1.

Ishan plied his trade for a local team in Pune named AIYFA Sky Hawks. He trained under coach Vivek Nagul. After quitting his college, he received an opportunity to represent ARA FC in the 2nd Division League in 2018-19. It was their first season in the league and Ishan played under Mr Nagul’s tutelage. “I trained under coach Vivek Nagul since 2015. He shaped me as a footballer and helped me kickstart my career. He has had a big impact on my career and helped me a lot to strengthen my basics and improve my game overall” said Ishan. 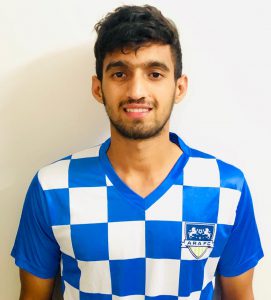 Speaking to Mr Vivek, he too was full of praise for his student. “He is a talented lad. Ishan is technically good. But apart from his natural attributes, what makes him stand out from others is that he is dedicated, punctual and always willing to learn. Now, since he has an experience of two years in the 2nd Division League, it is the right time for him to take the plunge into the I-League. He has potential and can be a big prospect provided he receives guidance and infrastructure.” quipped Mr Vivek Nagul, Head Coach of ARA FC.

After spending a year in Ahmedabad playing for ARA FC, Ishan found the next opportunity at Bengaluru. Having consulted with his agent Mr Pranay Kapuria, he made up his mind to change cities. “I had heard a lot from Amey and Hardik who were already playing for FC Bengaluru United at the time. It is one of the most professional teams in India, and I feel fortunate to have people, management, and players around me who have a tremendous work ethic. It’s a privilege to play under Richard Hood and Gouramangi Singh” said Ishan.

Speaking to his best pals Amey Bhatkal and Hardik Bhatt, both claimed that his presence on the pitch motivates them to do better.

“One of the most hard-working and disciplined athletes that I have shared the field with. His skill with the ball, extraordinary vision to find strikers is unbelievable. From ARA FC to FCBU he’s been the funny guy who makes you laugh before the match to release that pressure and afterwards if you’re feeling low. He’s more than just a teammate” – Amey Bhatkal

Talking about football in Pune, Ishan’s hometown, he feels that there is huge potential, but lack of facilities. The closure of Bharat FC, DSK Shivajians, Pune FC and FC Pune City has muddled the game in the city.

Idolizing Eugenson Lyngdoh from the national team because of their similar journey of starting as an engineer to then becoming a footballer, Ishan is gearing up for the post COVID-19 world maintaining a strict regime. His dream remains to represent India soon.

Once rejected by even 3rd division clubs in Kolkata, Sandesh Jhingan now relishes the pressure of captaincy
Sunil was short, and didn’t evoke thoughts that he could score: Subrata Bhattacharyya