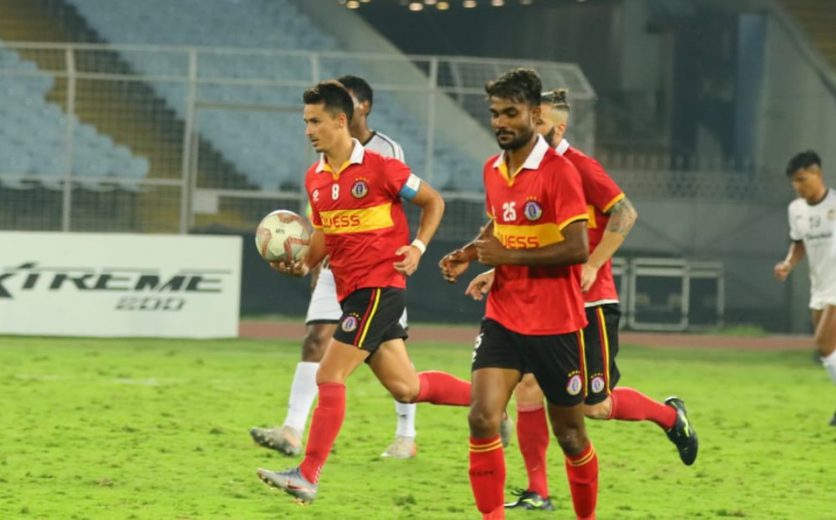 Willis Plaza turned nemesis for the Red and Golds yet again, giving the visitors an early lead but Jaime Santos Colado rescued a point in the dying seconds of stoppage time for the home side.

QEB were made to pay for schoolboy defending early on in the 10th minute. Dawda Ceesay’s lobbed delivery found Willis Plaza and in an attempt to close down the Trinidadian, defenders Mehtab Singh and Asheer Akhtar got in each other’s way. Plaza, with acres of space, took his time with the shot but the connection was sweet and left Mirshad in goal with no chance.

The hosts moved forward with more intent after the setback. Brandon and Jimenez Espada came close on two occasions, with either attempt sailing wide albeit not by much.

Arguably the best chance of the half fell to Colado, after compatriot Juan Mera’s cutback had found him inside the Churchill box completely unmarked. His ensuing shot was on target but visiting keeper James Kithan did well to react.

In the 35th minute, Colado tried returning the favour to Mera, finding him just outside the edge of the box with a cheeky back-flick. Mera pulled the trigger but could find only the side netting.

Mapuia had a glorious opportunity to extend the daylight on the scoreboard for the Red Machines going into half-time. He combined well with Plaza, played a slick give-and-go before testing Mirshad in goal, who palmed it straight back to Mapuia’s feet. But, he squandered the second invitation with the goal gaping.

QEB came out in the second half and continued to ride on their offensive ascendency. Mera and Colado kept the Churchill backline on their toes throughout the evening. In the 54th minute, the home team broke forward on the counter. Mera played Colado down the right, who took a couple of touches forward before taking on the shot. However, Kithan in goal denied the Spaniard with an excellent save.

In pursuit of the equaliser, Ansumana Kromah was introduced near the hour mark by coach Rivera. In the 70th minute, Kromah converted Victor Perez’s delightful cross and set off to celebrate, only to realise seconds later that he had been flagged offside.

Two minutes later, QEB struck the woodwork twice in a space of five seconds. A Juan Mera corner was met by Mehtab Singh but his header ricocheted off the crossbar before Churchill’s Ponif Vaz, in an attempt to head clear, struck the woodwork again but to his relief, survived scoring an own goal.

Kromah had a golden opportunity to play super-sub in the 86th minute but instead, he missed an absolute sitter after Mera had played him through and the forward had only the keeper to beat.

Churchill seemed to have successfully completed the heist but in the fifth and final minute of stoppage time, Suresh Meitei’s reckless challenge on Kromah earned the hosts a penalty. Colado stepped up for the responsibility from 12 yards. He was initially denied by James Kithan, who had guessed right but the rebound fell straight back to the Spaniard, who made no mistake with the second bite of the cherry.

With the spoils being shared, Churchill remain at third place with 20 points while Quess East Bengal stand at a point behind, having also played a match more. Quan Gomes of Churchill Brothers was adjudged to be the Hero of the Match.