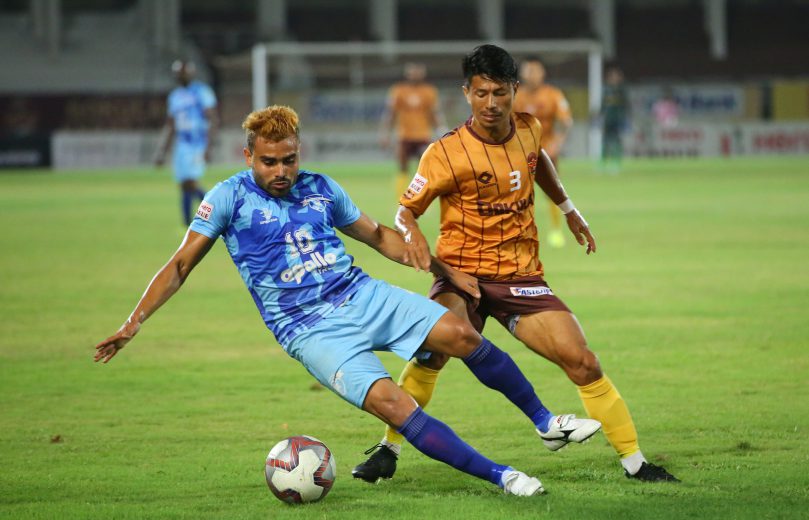 Gokulam Kerala FC and Punjab FC shared the spoils in a 1-1 draw in their Hero I-League 2019-20 fixture at the EMC Corporation Stadium in Calicut on Saturday (February 29, 2020). Punjab FC’s Dipanda Dicka drew first blood in the 33rd minute thanks to a defensive and goalkeeping lapse by hosts Gokulam while the visitors returned the favour in the 63rd minute to allow Nathaniel Garcia to equalize for Gokulam Kerala FC. Garcia was also adjudged to be the Hero of the Match.

With this result, Punjab FC remain in second place on the league table with 22 points in 14 matches — 10 points behind leaders Mohun Bagan, who can extend the gap at the top to as many as 13 points with six games to play if they can win Sunday’s encounter away at TRAU FC. Gokulam, meanwhile, are still seventh with 18 points in 13 games.

The game started with the home side pressing hard for an early lead. Marcus Joseph along with Henry Kisseka and Garcia ensured that the Punjab FC defence was on high alert for most parts of the game. However, credit has to be given to Punjab’s backline along with their Nepalese goalkeeper Kiran Kumar Limbu, who stood like a wall to ensure that the deadly attacking duo of the hosts was not left with any space to find the back of the net.

Punjab, who started the first 10 minutes of the game slowly, gradually arranged themselves hoping to draw first blood. Gokulam, who have not been too solid in defence so far this season, were on their toes trying to stop Punjab’s counter-attacks. However, the side from the North soon struck gold in the 33rd minute through Dipanda Dicka, who made no mistakes in finding the back of the net after exploiting a defensive lapse and miscommunication between Gokulam’s goalkeeper CK Ubaid and defender Mohammed Irshad.

Trailing by a goal, Gokulam tried hard to equalize — attacking in short bursts. But, some gutsy goalkeeping and a super-alert Punjab defensive line ensured the first half came to an end with the visitors enjoying a 1-0 lead.

The second period began with the hosts pressing hard for an equalizer but Punjab holding on firm to their scoreline advantage. It was not depictive of the quality of football on display — with the hosts still trailing even though they were playing better football. However, Gokulam’s lack of innovation in the final third ensured they had to work harder for that elusive equalizer.

Gokulam’s prayers were soon answered when a long-range effort by Garcia in the 63rd minute sneaked its way into the back of the net, giving the hosts a much-needed leveller. Buoyed by the goal, they went on attacking spree just afterwards in search of the lead but Punjab were strong in their attempts to not repeat their error and kept the Gokulam’s attacking line at bay.

The Kerala side were unlucky not to find the net towards the end as Joseph fired in a long shot in the 81stminute that hit the post while the in the dying moments of injury time, the hosts failed to capitalize on a scoring opportunity in front of an open goal. The game thereby ended with both teams sharing a point each as the referee blew the final whistle.