I could not sleep at night after we defeated Cameroon in Nehru Cup final, reveals Mehtab Hossain 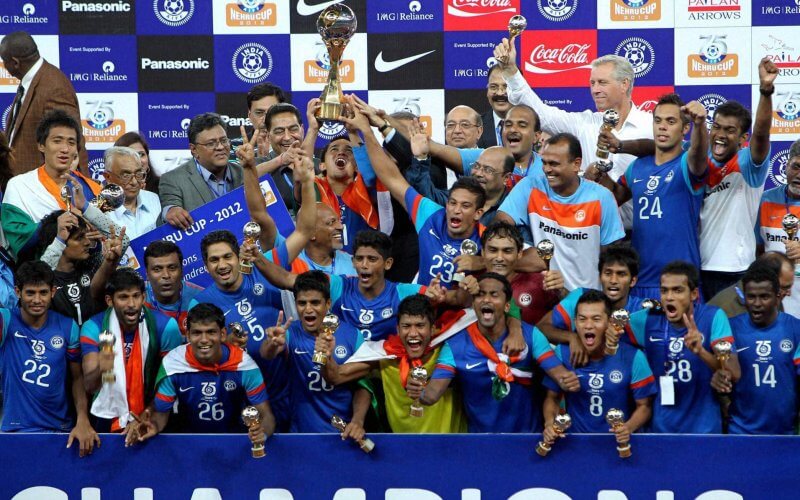 Dr. APJ Abdul Kalam once famously said: “Dream is not the thing you see in sleep. It is the one which doesn’t let you sleep.” In my case, I could not sleep after fulfilling a dream I held since childhood.

Every footballer aspires of winning trophies for the Nation and the night we defeated Cameroon in the final of the Nehru Cup 2012 (September 2, 2012), sleep completely eluded me — with my mind still overflowing with joy — my body exhausted from the gruelling battle it had endured.

I look back at it as my career’s best match. The feeling of winning a trophy for my country, in front of our fans, that too against such a strong opponent and creating history — it’s something which will stay with me forever.

I vividly remember the scenes of joy that erupted after we clinched the penalty shootout. We could hardly believe that we had beaten such a strong team! Some thousand fans even rushed onto the pitch to celebrate with us waving the Tricolour like mad.

As we entered the dressing room the scenes were just crazy! Photo sessions were going on all around and the players were dancing and singing. I remember Sunil (Chhetri) entered the room and exclaimed, “Yaar, hum log ne yeh kya kar diya!” (What have we done!). The coach was trying to send us for our ice baths but all of us were just in our own world at that time — enjoying the moment to our heart’s content.

Recollecting the happy moments is always good but remembering the amount of hard work that went into the triumph is also equally important. The foundation of the win was laid by the intense preparation we did and the positivity injected into us by coach Wim Koevermans.

Our coach had read the Cameroon team very well and the style of football they played utilizing the wings to maximum effect. For us, the pre-match classes were perhaps more important than training. We dissected the opponent in detail and decided on our tactics and strategy. We made our plans for the opposition — the key areas, the runs to make and how to shut down their attacks, etc.

The confidence in the team was another crucial factor. Our mentality was simple — we knew that if we can win, we can create history. In every player’s eyes you could see the grit and dedication to go out there and get the victory. All of us were determined to lift the trophy and make India proud.

Once we were out on the pitch, we played like warriors. We played a 4-4-2 formation and knew that we had to work hard to maintain our shape. Thanks to the way the goalkeeper, defence and midfield combined and communicated, we were able to play as a cohesive unit.

#OnThisDay in 2012, the #BlueTigers 🐯 clinched their third Nehru Cup trophy in New Delhi 🏆

As a central midfielder against a strong and physical opposition, I knew that my work was cut out for me. However, the job in the middle of the pitch was made easier because of the great understanding I shared with Lenny Rodrigues. I have always enjoyed our partnership — I knew that he would cover for me if I went closer to the wing and he knew that I would fall back when he would make his forward runs. Against Cameroon, our pairing was at its peak.

In the match, Gouramangi Singh gave us an early lead with a great header. Cameroon, though, scored on either side of the break. However, not once did we lose hope and we knew that all it would take is one opportunity to get back into the game. Despite going down a goal, we continued to create scoring chances and finally, our perseverance paid off in the 78th minute.

I snatched the ball from an opposition player and played an aerial through-pass behind the defence for Sunil. He was fouled by the keeper and from the resulting penalty, he converted coolly to equalize. The goal sent a lightning bolt of confidence through us as we continued to press for the lead but the match still went into the dreaded penalty shootout after 120 minutes.

✅ or ❌? Relive the intense penalty shootout between India 🇮🇳 and Cameroon 🇨🇲 from 8⃣ years ago as the #BlueTigers lifted the Nehru Cup! 🐯🏆 #IndianFootball ⚽ #BackTheBlue 💙 #OnThisDay 🗓️

All of us were trying to remain calm under the pressure as the tie-breaker began. Robin (Singh), Sunil and Denzil (Franco) all converted their penalties successfully and then, it was time for me to make the dreaded walk. The tension in the stadium was at fever pitch and I was feeling tensed about my kick as I approached the penalty spot.

What if I miss!? What if I cost India the trophy!? — these thoughts crossed my mind.

However, I managed to calm myself down and used my experience to control my emotions. Thankfully, I was able to convert my attempt successfully — sending the keeper the wrong way. Clifford (Miranda) then scored our fifth penalty in a row and when it came down to the most crucial kick, the Cameroon player (Makon Thierry) hit the post and missed — sending the whole team as well as the JLN Stadium into delirium.

It was a moment of pure, unbridled joy. Even when I look back at the video of the match now — after eight years — words fall short to express how I felt. I just look at the screen and smile.