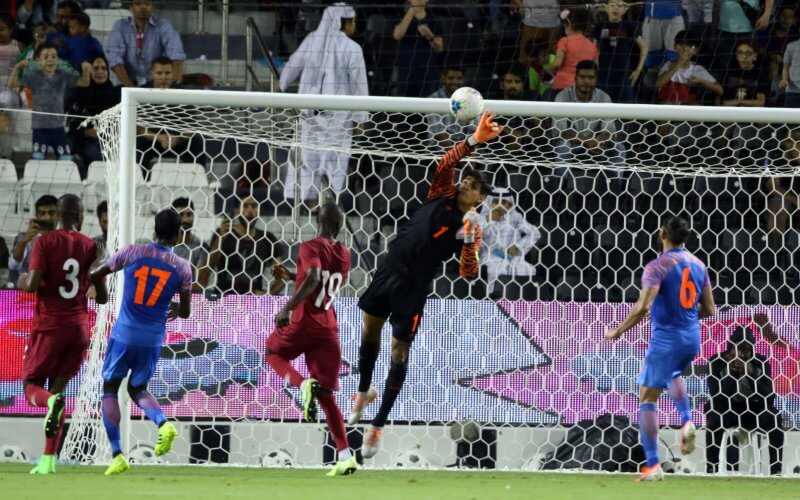 Gurpreet Singh Sandhu, the numero uno goalkeeper for the Blue Tigers, felt nostalgic while sharing the impact of Colm Toal and Tanumoy Bose on his career during a live chat on AIFF TV.

“It literally gives me goosebumps recalling the time I worked with Colm-sir (Toal) and Tanumoy-sir (Bose). It was a privilege to work with them. Colm-sir was huge for us. Whatever I do or say for them is less. I can’t repay their debt,” Gurpreet averred.

Gurpreet, the twenty-sixth Indian Footballer to be conferred with the prestigious Arjuna Award, grew up under the coaching of Toal since getting the call-up for India U-16 National side in 2007. He was under the watchful eyes of Toal and Bose for the next three years till Toal picked him for the AFC U19 Championship 2010 qualifiers in Erbil, Iraq.

“He (Colm Toal) was one of the coaches who showed us what modern football is all about.  The way he commanded a room, the way he taught us was remarkable. I still remember how he used to have his shirt folded up. I wish to meet him again and share those stories. It has been a long time, almost 13 years, since I met both of them,” he continued.

Meanwhile, he revealed that his goalkeeping credentials were not at par but Colm Toal insisted to include him in the contingent and then Bose worked relentlessly to make him sharper.

“Tanumoy-sir told me that the only reason I was called up was because Colm-sir wanted me to be there. I still remember the amount of hard work these guys put in behind me. It was just phenomenal. Their efforts helped me achieve whatever I have done till today.”

Significantly, Sandhu’s exploits during the AFC U19 qualifiers impressed none other than the then National Team coach Bob Houghton, and it eventually paved his pathway to the Blue Tigers camp before the AFC Asian Cup Qatar 2011 after Arindam Bhattacharjee picked up an injury during the preparatory camp.

Gurpreet inked his first professional contract in 2009 with East Bengal before heading to Indian Arrows on loan. He came back to the Red & Golds in 2011 and went on to become their first-choice goalkeeper before joining Norwegian outfit Stabaek FC in 2014.

“Tanumoy-sir was a big reason behind me joining East Bengal. As he played there, he knew the whereabouts. He told me to go to a club where I could train under a goalkeeping coach and improve myself. Then I headed to Kolkata,” the 28-year-old goalkeeper informed.

In fact, Bose, much known for his sharp reflexes during his playing days stated: “As Gurpreet joined East Bengal at that age, he learnt to adapt and handle pressure of a big club. That helped him immensely in his career as he moved on.”

Gurpreet’s fairy tale journey continued as he became the first-ever Indian footballer to play in a Europa League match when he started for Stabaek FC against Welsh side Connah’s Quay Nomads FC in an away match in Rhyl, Wales on June 30, 2016.

Meanwhile, Sandhu shares a special ‘comfort level’ with Jeje Lalpekhlua, another livewire from Colm Toal’s squad. The ‘Mizo Sniper’, who has already played more than 50 international matches for the Blue Tigers, was part of the first Indian Arrows batch alongside Gurpreet Singh Sandhu during 2010-11.

“When I was playing for India U-16 National Team, Jeje-bhai was in India U-19 National Team. When we got together in Indian Arrows, the chemistry was palpable because both teams used to follow the same system. It didn’t take much time to gel together,” the gloveman added.

“Later, when I started to play for the Senior National Team, he (Jeje Lalpekhlua) was already there. The comfort level was always there and the formula was an easy one for me. I just needed to put the ball for him, who would find Sunil-bhai eventually,” he continued, “To see him injured for so long was saddening. We missed him during our recent matches as we did Sandesh too. He is a talented player. You need someone with that size and those big legs on the pitch.”