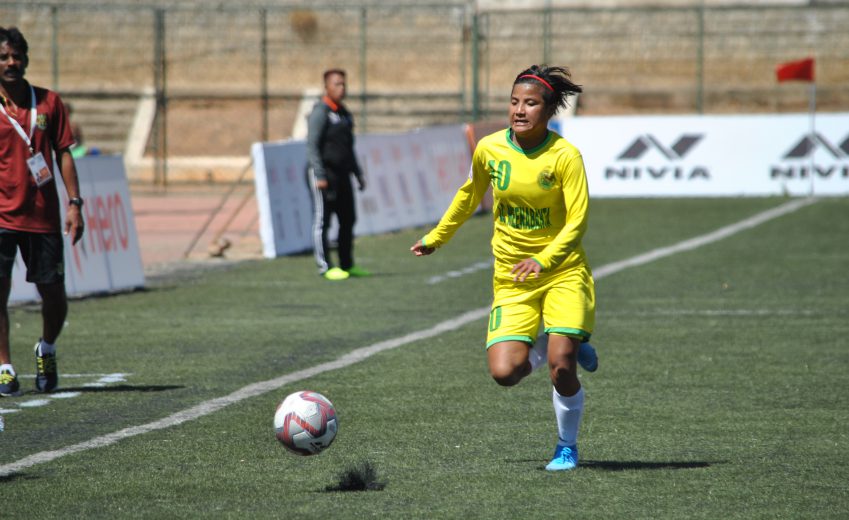 KRYPSHA FC cruised to a 4-0 victory against Kickstart FC Karnataka in the opening match of the 4th Hero Indian Women’s League (IWL) on Friday, January 24 at the Bangalore Football Stadium.

KRYPSHA had the upper-hand on paper, boasting the likes of Sweety Devi at the back, Ratanbala Devi spearheading proceedings in attack and skipper Dangmei Grace in the middle of the park.

The Manipuri started proving their mettle, right from kick-off. Dangmei Grace made no mistake when she was played through on goal, and with only the keeper to beat, hammered it onto the roof of the net to score the first goal of this season, in the 15th minute.

Their lead was doubled just four minutes later, this time by Anju Tamang. In what seemed like a carbon copy of the first goal, she maintained her composure and slotted it past a helpless a Rashmi Kumari in the Kickstart goal. It was Grace again, who capitalised on a total lapse of concentration in the Kickstart backline to add the third in the 36th minute.

She had the chance to complete her hat-trick in the 41st minute, but the keeper did well to come out of her line and tackle her. The challenge seemed fair but the collision between the two, however, rendered both women unable to continue.

Grace was replaced by Asharani Devi while substitute keeper Aiswarya A came on to replace their injured keeper. In the second half, Kickstart did very little to weave any real threat and Krypsa piled more misery on them with a fourth.

In the 64th minute, a speculative clearance from just outside the Krypsha box had put Ratanbali Devi through on goal, and with acres of space and ample time, she rounded off the keeper to rubberstamp the victory in emphatic fashion.