Hero IWL has provided a broader base of players: Maymol Rocky 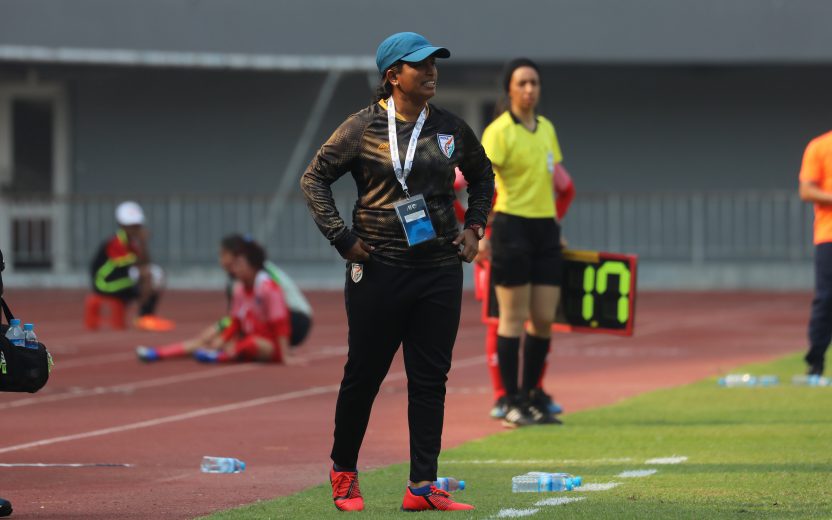 As the Hero Indian Women’s League 2019-20 enters its summit clash on Friday, Indian Women’s Team head coach Maymol Rocky feels that she has a broader base of players to choose from after witnessing the group stages and semifinals played at the Bangalore Football Stadium in Bengaluru.

“The number of players has increased. The competition is higher and I’m really happy that I’ve got a bigger base of players to choose from,” Rocky said to the-aiff.com. “Once the tournament is over and we start our training camps, you will see a few new faces and youngsters, for sure,” she added.

The big news ahead of the start of the Hero IWL 2019-20 Final Round was that Indian national team forward Bala Devi became the first female player from the country to get a professional contract with a European club – Rangers Women FC in Scotland.

Rocky feels that Bala going to the will help the national team, as the attacker would already have played at a higher level, when she would join the Indian team for international matches and camps. “It’s really good that Bala is playing in a higher competitive league in Europe, and it’s good for us as well, because she will come back and perform for us whenever she is required to,” she said.

Apart from Bala, national team fullback Dalima Chhibber is also playing in Canada with the Manitoba Bisons. While the India head coach believes that the absence of these two players will be felt in the league, she also believes that the injection of certain foreigners has increased the quality of the league.

“As far as the level of the Hero IWL is concerned, yes, we will miss the likes of Bala and Dalima, who are playing abroad now,” she said. “But I feel that a number of quality foreigners have also come in and made an impact on the league — so we are also playing at a pretty high level now.”

The Hero IWL semifinals saw Kryphsa FC defeat Kenkre FC while Gokulam Kerala FC got the better of Sethu FC. Rocky feels that the final between Kryphsa and Gokulam Kerala, where most of the India internationals ply their trade, will be a tough one.

“If you see Kryphsa and Gokulam, most of their players are in the national team. So I feel that the match between these two sides will be a hard-fought one and I am looking forward to see how the players do. May the best team win!” she rounded off.