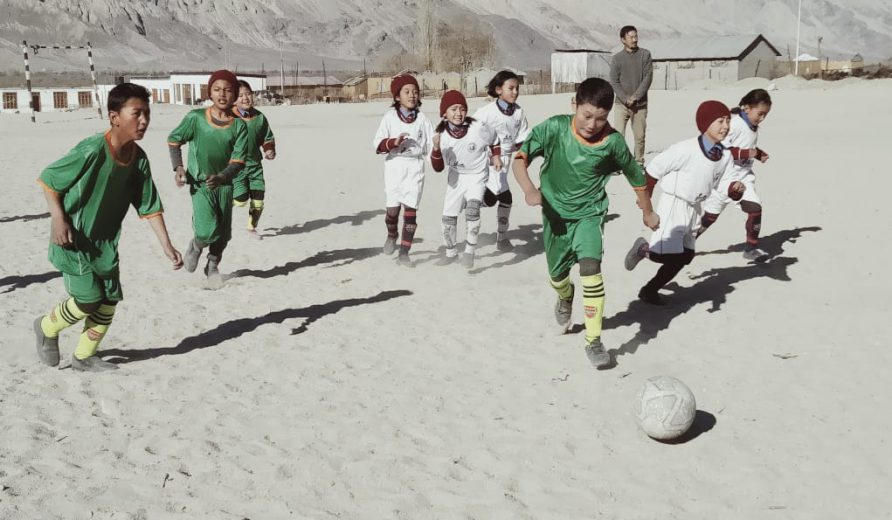 NEW DELHI: Bill Shankly, the legendary Liverpool FC manager once said, “Football is not about life or death, it is more important than that.” The kids from Leh have probably grasped this concept more than anyone else. Since the introduction of Golden baby Leagues, they have sprung into life in the picturesque northern landscape of India, which has turned more joyous.

“Compared to the cosmopolitan cities of India, we have minimal resources available for amusement and leisure. Our kids don’t have the luxury to visit a game-parlour or park on their own. Football, especially Golden Baby Leagues are like everything for them. It’s nothing less than fresh oxygen for the children as well as their parents,” Tsering Tsomo, the Golden Baby Leagues operator narrated.

Incidentally, the interest around Baby Leagues has been astounding in this hilly region since 2018 when the project was launched. Moreover, as quoted by Tsering, the participation of girls was exemplary across all the venues.

“In 2018, when the All India Football Federation gave us the opportunity for the first time, we touched base with as many as possible schools and they responded well. We could gather 250-odd kids across three age-groups – U-6/7, U-8/9 and U-12/13 and you won’t believe, almost half of them were girls. It was a great advertisement for the interest around Football in Leh,” Tsering informed.

A grassroots leaders course was hosted in Leh back in 2018, which motivated them to host more activities. Hence, they presented a plan to organise Baby Leagues with resounding success.

“I can’t thank the All India Football Federation enough for organising that Grassroots Coaching Course in 2018, which, in turn, paved the path for Golden Baby Leagues in Ladakh,” she continued, “We left no school untouched where we didn’t pay a visit to speak to the Physical Education teachers and convince the principals about the project.”

“Anvy Lavasa, District Commissioner, Ladakh lent a hand and her interest was contagious. She herself visited quite a few venues to encourage the children and their parents to participate in large numbers.”

However, communication has always been a concern for the dwellers but they have braved it for the sake of participating in the flagship project of the All India Football Federation – a glaring step towards taking Indian Football forward together. Tsering, who possesses a coaching Diploma from NSA, Patiala, took the challenge of hosting Golden Baby Leagues at the Bogdang Turtuk village which is more than 200 km away from Leh and passed it with flying colours.

“In Leh, we hosted Golden Baby Leagues for three age-groups at the NDS Ground, which is at the heart of the city. But the real challenge was to host the league at the Bogdang Turtuk village which is 200 km away from Leh. The local conveyance was a concern but the parents responded. Not only that, we took the Golden Baby Leagues to the Sumoor Village too which is 90 km away from the Siachen glacier,” the woman football coach averred.

A lot of things have been missed this year, and Golden Baby Leagues fall into the same bracket. Tsering rued the opportunities but she regrouped quickly while mentioning how she’d take the challenge head-on to take it to other areas that are yet to be tapped.

“Yes, we have lost valuable days owing to the pandemic but we can’t just sit and lament these missed days. We have to pull up our socks and get in on the act quickly. Khaltsi, Singelalok and a few other blocks are yet to be nurtured and we’re hoping to get similar kind of responses from there as well. Until and unless every single kid in Ladakh hits the football pitch wearing the colourful football jerseys of Golden Baby Leagues, our job will continue,” a focused Tsering stated.