Kalyani, October 16, 2020: Garhwal FC looked set to sign off their Hero I-League Qualifiers 2020 campaign with a win but ended up having to share points with ARA FC despite the team from Gujarat missing a first-half penalty. Defender Neeraj Bhandari gave his team an early lead but a late penalty from Surajit Seal saw both teams walk off the field at the Kalyani Stadium with honours even on Friday (October 16th, 2020).Garhwal made three changes to the starting line-up from the previous game, chief among them being the inclusion of Afdal Varikkodan, who broke their goal-scoring duck after coming on as a substitute in their previous outing. Varikkodan proved to be a constant threat and had plenty of opportunities in the game but this time the striker simply couldn’t find his scoring boots.

ARA were struggling to cope with the early pressure and soon found themselves behind, courtesy a set-piece. Muhammed Shafeer won the foul in the opposition half after being hacked down by Cedric Fernandes just as Garhwal were upping the tempo in the 17th minute.

Captain Bala Alhassan sent in a beautifully floated ball into the area and defender Bhandari timed his run to perfection before connecting with a powerful diving header from close range to open the scoring.

ARA had a couple of good opportunities as they began to find some joy with long balls into their forwards. Shoaib Ahmed, who was Vivek Nagul’s only change from the previous game, was sent through in the 22nd minute but Garhwal custodian Sayak Barai showed good presence of mind, lobbing the ball over the onrushing forward with his right hand before collecting safely.

Goalscorer Bhandari was at hand to fulfil his primary responsibility as a defender in the 35th minute when ARA winger Pratik Swamy skipped past Rahul Das to break into the area. However, Bhandari was attuned to the danger and snuffed it out with a last-ditch tackle.

Pratik however, looked to have the better of Das, and four minutes later skipped past him again, this time inside the area and was brought down by the defender’s trailing foot, winning a penalty. Ahmed took the onus of the spot-kick but saw his effort fly high over the top right corner.

The missed penalty ensured Garwhal went into the breather with a slender one-goal advantage, but well aware of the threat the team from Ahmedabad possessed. 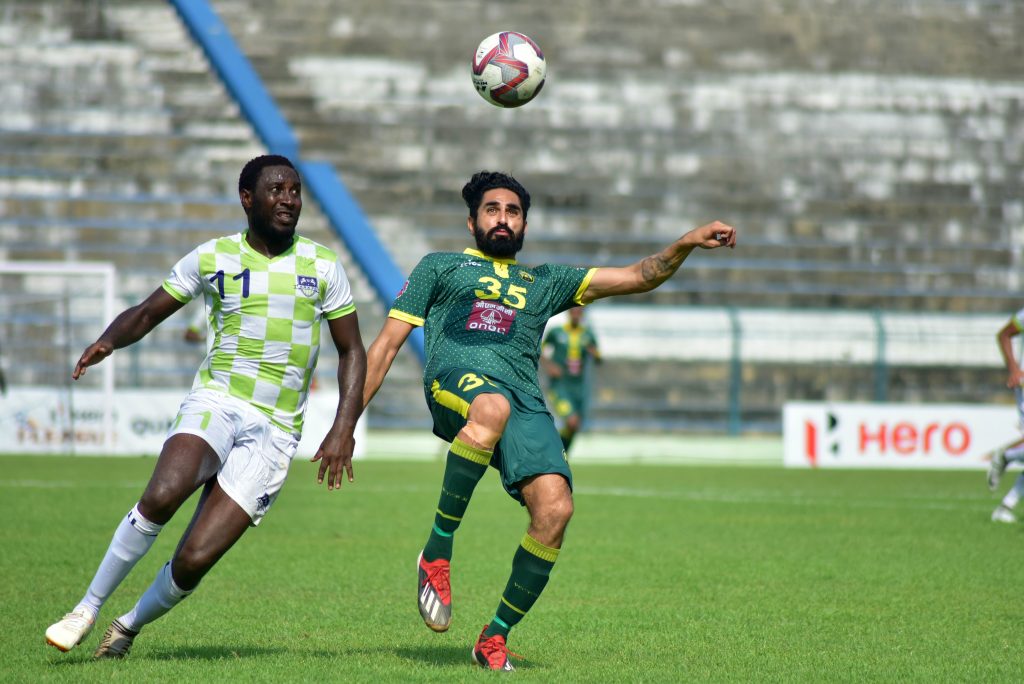 Garhwal started the second half brightly with Mahip Adhikari rattling the crossbar in the 50th minute with a first-time volley from the edge of the area. At the other end, Ahmed had another golden opportunity after being played through on goal but his shot only rippled the side netting.

A counter-attack resulting from an ARA corner should’ve seen Garwhal double their advantage but once again they were wasteful in front of goal. Adhikari carried the ball from inside his own half and even got the better of his marker inside the penalty area. But with only the keeper to beat, the midfielder squared it to Varikoddan, whose weak effort was blocked by substitute Akshay Mall.

Varikoddan had another great opportunity in the 79th minute as he got a deft touch to a cross from Suman Sarkar but this time Melroy Fernandes in the ARA goal positioned himself perfectly to save from point-blank range.

The missed opportunities came back to haunt Garhwal in the very next minute. Prabin Tigga played a beautifully-weighted long ball into the path of Stanley Eze, who saw his attempt cleared off the line but the Nigerian striker was fouled just as he pulled the trigger and the referee signalled for a penalty.

This time defender Seal stepped up to take responsibility and made no mistake, sending Barai the wrong way to level the score. The goal sparked off a frenetic end to the game as both sides hunted relentlessly for the winning goal but ended up having to share the spoils.

Reflecting on the outcome, Garhwal assistant coach Anup Singh said after the match, “It was the last game and we came to win. We got the lead and wanted to maintain it in the second half as we were getting so many chances but the defence got shaky. Changing the strategy at the back didn’t work well though.”

ARA FC assistant coach Salim Pathan said, “The game didn’t work according to our plan. We wanted to take three points from this game and move onto the next, but it did not work. The first penalty was very crucial but a miss can happen in the game under pressure. But, that could’ve changed the entire outcome. For the next game, we’ll ask our boys to just play for pride. We’re already out but we’ll try to play as good as we can as a team.”

The win marks the end of the campaign for Garhwal who finish with just the solitary point on the table. ARA FC, who now have two points from three games, are out of contention for the top spot and next return to the Kalyani Stadium to take on Bhawanipore FC on the final matchday on Monday (October 19, 2020).