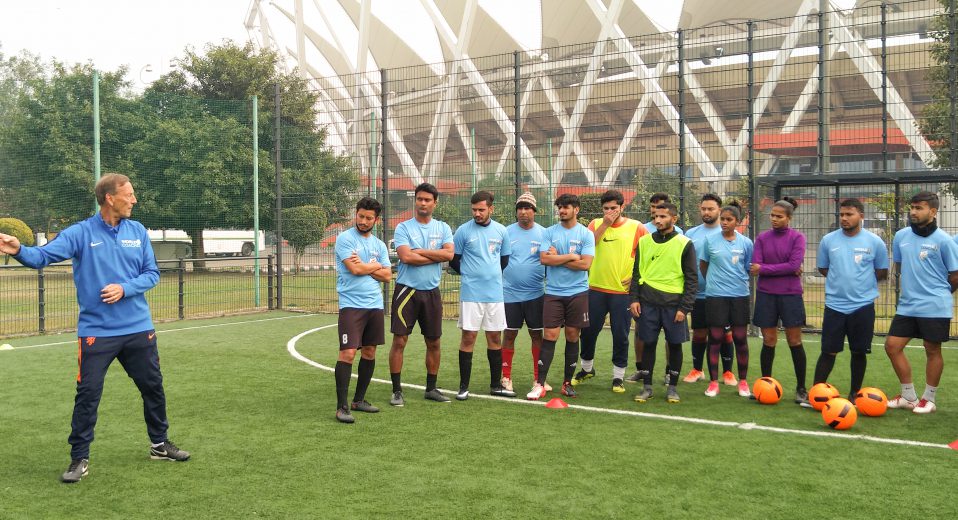 Former Netherlands International and ex Ajax Amsterdam and FC Barcelona star Johan Neeskens is amongst those select few who were instrumental in changing football, as we know it in the modern-day.

We have had great players and we have had legendary ones. And yet there are those who have, forever, left their footprints on the sands, changed the ‘Beautiful Game,’ and moulded it in a manner that improved the sport world over.

Having come to Delhi as part of an exchange programme between KNVB (Netherlands Football Federation) and the All India Football Federation, Neeskens took to the pitch with a number of young coaches, explaining to them the different training techniques required to play an expansive game.

STARTING TOTAL FOOTBALL FROM THE BASE

It was at the Jawaharlal Nehru Stadium in New Delhi where Neeskens took to the pitch with former Groningen man Bert Zuurman to explain the implementation of expansive footballing tactics to a number of local coaches.

Starting with just four players on the pitch, Neeskens introduced a training exercise that at first seemed alien to the young coaches. He often stopped them to explain what to do under different situations. Very soon the young Indian coaches began to master the exercise and even revelled in it.

“You need to explain the objective of any training exercise to your players. Only then will they begin to grasp it,” Neeskens explained as one of the first steps towards implementing the style of play that he was so famous for.

It was in the 70s that the philosophy of Total Football was introduced by Rinus Michels, and implemented on the pitch by the likes of Johan Cruyff and Johan Neeskens and the rest.

Neeskens believes that the philosophy of his former coach has also developed over time, and evolved with modern football. However, he remains a firm believer in the fact that Total Football’s core values have helped keep it intact.

“We can’t say that Total Football has changed because football itself has changed. More and more countries around the world have started to understand the game, which is why even teams that want to keep the ball have had to change the way they play,” Neeskens said.

“Football is a funny game. You can explain it and put it on paper, but that may not reflect on the pitch,” he said. “You have to tell them what is important in a particular situation. Once they grasp the base idea behind a particular exercise, you will see that they will also bring in their own creativity to it, and execute it in manners that you as a coach would not have even thought of,” the Master declared.

In terms of Indian Football, Neeskens believes that the players themselves should start from a much younger age.

“Generally we have seen kids starting to train under proper coaching systems around the age of 10-12,” he said. “It all comes down to how experienced a player is. Even at the age of 10-12, I believe that a player should have already had around five years of good coaching behind him. Then you can try out complicated routines which they can execute.”

Neeskens drew a comparison with the USA in the 1970s. “Football was nothing over there in the 1970s. But they started at the very base level and that is why they have improved. They have a decent men’s team, and they have the best women’s team in the world. Japan, Korea and China have also followed the same model. When you start down there and then move forward, the future will be bright for India,” he maintained.

Neeskens believes that the eye-catching game of Total Football that was implemented by legendary coach Rinus Michels lives on today in a more evolved manner. “We can’t say that Total Football has changed because football itself has changed,” he said.

“In the current day, Liverpool is a team that plays Total Football. Everybody is moving, be it in attack, or in defence. It’s the same with Manchester City. Now, you would have a lot of teams that try to keep the ball and move things around,” he continued. “More and more countries around the world have started to understand the game, which is why even teams that want to keep the ball have had to change the way they play.”

“It all depends on the coaches and the quality of the players, and the idea of how to put them together,” said Neeskens. “As a coach, you need to figure out what you want your team to play. But you also need to figure out whether your players can implement those ideas out the pitch.”

Also Read: Defending champions take on table toppers to kick off ISL in 2020

Also Read: Bengaluru FC vs. FC Goa: 10 Things to Know About The Game