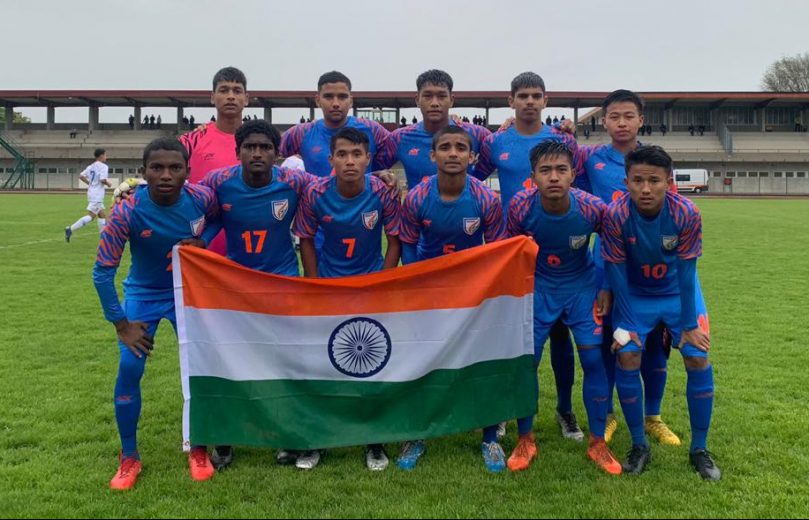 An exuberant India got their MU-15 Tournament off with a 0-3 defeat at the hands of USA in their opening match in Palmanova, Italy on Sunday, April 28, 2019.

Austin Brummet converted a penalty just after the changeover to put USA into the lead, before Carlos Cortez and Osvaldo Cisneros scored two more in the last 10 minutes.

The 70-minute match actually turned out to be a game of two halves. Both the teams started off with great gusto, as they attempted to breach their opposition’s goal early on. After settling into the game, India started to create chances through the likes of Ratanbi Singh, who won a free-kick on the 20th minute mark from 30 yards out. Maheson Singh tried his luck from the distance but sent his effort wide.

Maheson was involved in yet another close chance for India a couple of minutes later, but his shot was blocked this time. India goalkeeper Ayush Deshwal made a smart save minutes before the half-time whistle to keep the scores at 0-0 during the changeover.

USA got off the blocks swiftly in the second half, winning a penalty that was smartly converted by Brummet. Maheson had the perfect chance to put India back on level terms on the 61st minute, but his close-range free-kick flew just inches wide of the post.

Carlos Cortez scored a peach of a goal in the 63rd minute, when he curled it directly from the corner and into the Indian goal. Deshwal had no chance of saving that, as it sailed into the top corner.

The three points for USA were eventually secured with just seconds left on the clock, when Cisneros made it 3-0 for the Americans. India will next face-off against Mexico on Monday at the same venue.

Sumati Kumari: I believe we can go all the way to final and lift the trophy
AIFF appoints Isac Doru as Technical Director