Sumati Kumari: I believe we can go all the way to final and lift the trophy 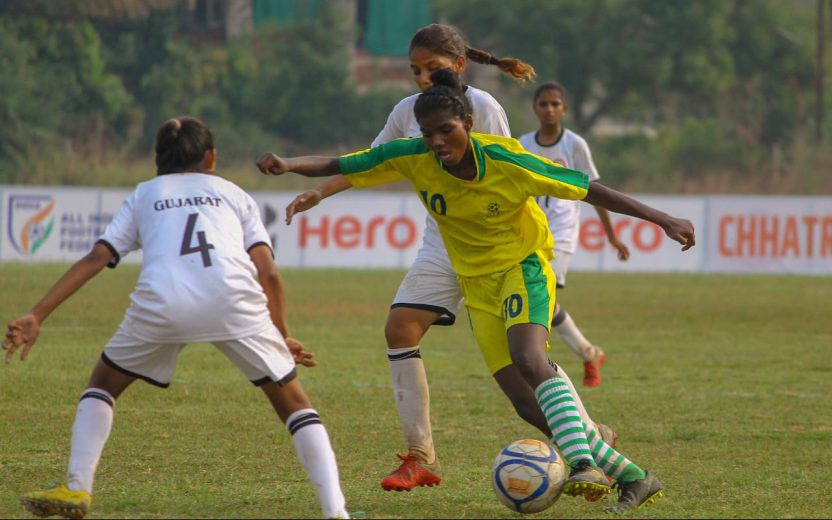 It has been a smooth ride for Jharkhand so far with an energetic and blazing strike force that has been trampling over their opponent with mammoth score lines and a resolute defence that is yet to concede a single goal.

Striker Sumati Kumari has been one of the architects of Jharkhand’s explosive winning run. In a quick chat with Footballcounter.com after their quarter-final encounter against Manipur, Sumati Kumari talks about her team, her knack of scoring goals and coaches’ contribution.

What do you think of your Jharkhand team?

We have a very good team and play as unit together, whenever someone makes a mistake others step-up and try to fix it immediately.

How does it feel to represent your state?

I am glad that I play for a very good team. Jharkhand is winning games and moving forward. We have just defeated teams like Manipur (3 time Champions).

How does it feel to be scoring regularly, dribbling past defenders and goal keepers?

Feels great, I have a confidence from within that I can take on defenders and beat goal keepers to score goals.

What do you think of your performances in this tournament and what are the contributions of your coaches?

I am happy with my performances although continuous has become tiring (a game per 2- 3 days). My coaches have been very helpful, instructing us continuously during the game too and that has helped us lot in executing our play on field.

Do you think you can reach all the way to the final and lift the trophy?

Yes, I think we can. We will try to play our A game and look for wins, in fact I believe we can go all the way and lift the trophy

Like idol Neymar, Delhi’s Aveka Singh aims to fulfill U-17 World Cup dream In 2020
USA ride on 2nd-half strike to beat India U-15 side