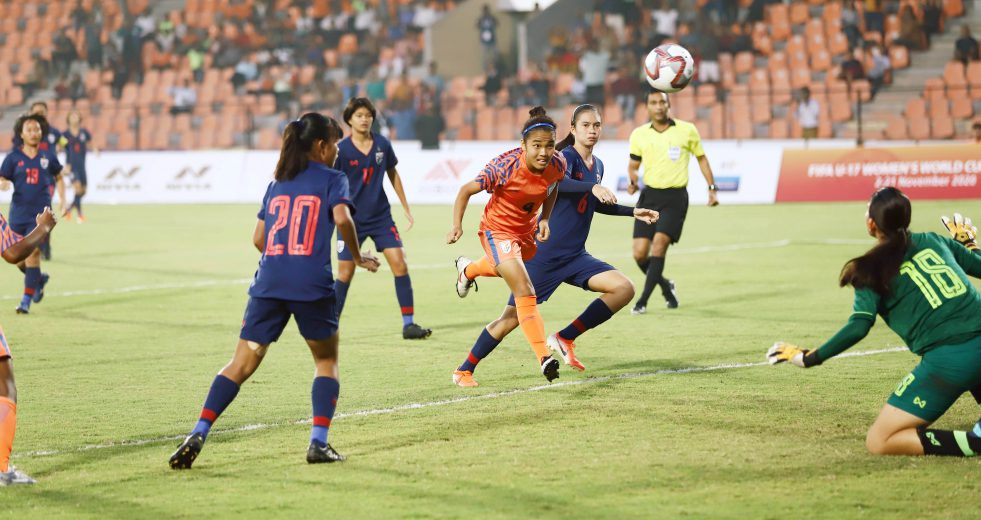 India U-17 Women’s team beat Thailand 1-0 in their second match of the U-17 Women’s Football Tournament, at the Mumbai Football Arena in Mumbai, on Tuesday, December 17.

The injury-time goal by Thounaojam Kritina sent India into the final of the tournament, where they will face Sweden at the same venue on Thursday (December 19, 2019).

India started off with a good tempo, with the likes of Astam Oraon and Thokchom Martina dominating the proceedings from the middle of the park. The trio of Lynda Kom, Sunita Munda and Sumati Kumari caused a lot of problems for the Thailand defence, making darting runs into the spaces.

Sumati, especially, put a lot of pressure from the left flank, often running rings around the defenders, to send in dangerous crosses or cut-backs. However, the chances could not be capitalised upon.

Soon, however, Thailand started to grow in the game, and dominated possession. However, defenders Shilky Devi and Jyoti Kumari were up to the task, thwarting the dangerous chances by the away side. The latter, in particular, was on top of her game, sniffing out the Thailand chances in the bud.

The two sides came out with more fervour after the change of ends, and Thailand soon had the best chance so far, when Janista Jinantuya was released through on goal. However, Indian custodian Manju came off her line and stuck her hand out to palm away a shot from close range. Sumati had the next big chance of the game, when she was played through on the left. She took notice of the goalkeeper coming off her line and lined up her shot, which thudded against the crossbar.

With around a quarter of an hour to go, Thailand captain Pluemjai Sontisawat went through on goal, but was tackled, as the ball fell to Jinantuya. However, Jyoti got in between the attacker and the ball, and soon drew a foul to diffuse the situation.

Soon running out of time, it was India head coach Thomas Dennerby, who made the attacking moves, bringing on Daisy Crasto and Sai Sankhe. The move almost paid off immediately, as Daisy finished off from an intricate move, but was flagged offside.

Thailand had the perfect opportunity to take the lead with about 10 minutes to go, when a swift counter attack saw India outnumbered three-to-one in defence. However, both Jinantuya and Sontisawat, who were unmarked inside the box, could not put away a cross from the left.

Thawanrat Promthongmee had a good chance from a close-range free-kick as the match wore to a close. Jinantuya got on the rebound, but her shot thudded off the woodwork. Substitute Kritina Devi stole the show in the end, as her long-ranger was fumbled on the line by Thailand keeper Pawarisa Homyamyen, as India got the lead in added time.

The final match is slated to kick-off at 5:30 PM IST and it’ll be streamed Live on Indian Football Team Facebook page.