Super Division: Juhu set the tone for playoffs as they canter past Iron Born 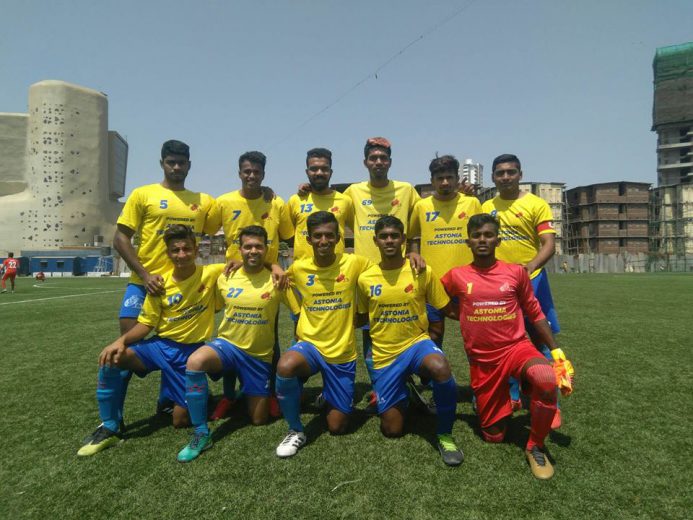 Mumbai, March 11, 2019: Juhu Sparks rollicked home to a 3-0 win against Iron Born and set the tone in the first game of the playoff stages at the Neville D’Souza Ground on Monday.

The Men in Yellow were at their clinical best as they struck when it mattered the most and waltzed home with the three points. The floodgates opened when Sachin Rawat put in an accurate ball from the left to Mahesh Kotkar as the latter hit home in the 17th minute. 1-0 and the goal proved to be a major confidence booster!

Iron Born surprisingly was ineffective in front of goal despite holding on to a chunk of possession in the first half. Was it nerves that got to them that they couldn’t finish off the half dozen chances in front of goal? Their profligacy came to haunt them as Juhu’s lynch pin Tyson Pereira latched on to a long ball and comprehensively beat off last man Shivanshu Rao before lobbing it past the goalkeeper in the 42nd minute.

Also, Rawat was a menace on the left flank as he carved open the CFCI defence numerous times. The best chance came on the stroke of the first half as he cut inside and beat two defenders only to hit the crossbar!  Though the first half finished 2-0 to Juhu still going by how things had panned out it looked only a matter of time before Juhu would hit the target. And it came in the 75th minute when Prathamesh Kamble dribbled past a defender on the right and slammed it past the onrushing goalkeeper in the 75th minute. 3-0 and it was game over for CFCI!

That goal totally deflated CFCI as they looked content to see out the rest of the game. And as the referee blew for the final whistle…Pereira and Juhu had set the tone for what may prove to be a thrilling set of playoff games. As for CFCI…they simply ran out of ammunition!

Also Read: Old guard to the fore as KSA see off CFCI