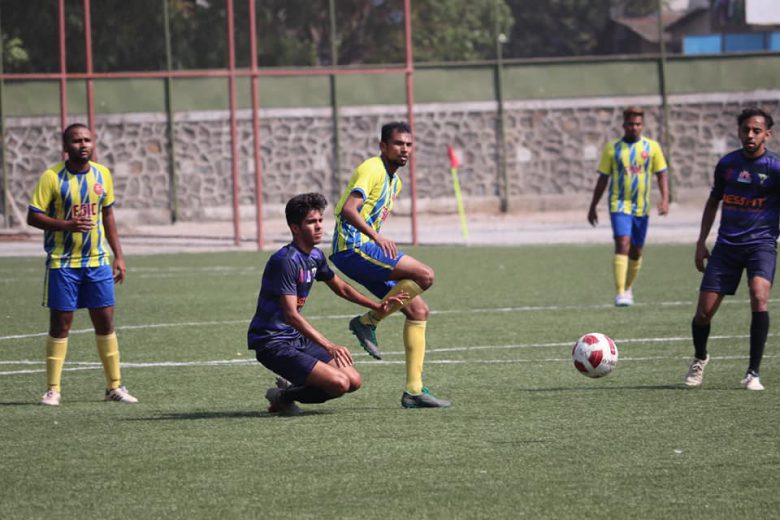 Mumbai, January 31, 2019: The ESIC-Chheda Nagar Fanatics game was ‘abandoned’ after a spate of red cards caused controversy at the Neville D’Souza Ground on Thursday.

The disgruntled ESIC players had a heated argument with the match officials over the substandard quality of refereeing. ESIC were univocal in their appeal for quality refereeing in the league.

Chhedda Nagar will appeal for a ‘forfeit’ result to the higher authorities.

A forfeit will result in a 3-0 win for Chhedda Nagar.

It was a blot on what was truly an engrossing game. Both teams had played an attacking brand of football with ESIC leading 2-1 at half time.

Ajinkya Umasare’s first-half brace was the highlight. His second goal was a gem — a mid-air volley off a cross from the left! Sahil Mhatre had scored for Chhedda Nagar in the 8th minute.

Umasare got a second yellow in the 52nd minute after a collision with the Chhedda Nagar goalkeeper.

David D’Souza joined Umasare in the dug-out after receiving his marching orders in the 56th minute.

Were those two sending offs warranted?

Chhedda Nagar smelt blood as they went in for the kill against nine-men!

Subhav Shrivastav and Gaurav Adhikari scored in the 67th and 70th minutes respectively to make it 3-2.

A red card to ESIC’s Egypsio Noronha in the 80th minute put proceedings to a halt.

Adhikari got his marching orders as both teams had a debate with the referee.

The game ended 3-2 to Chhedda Nagar.