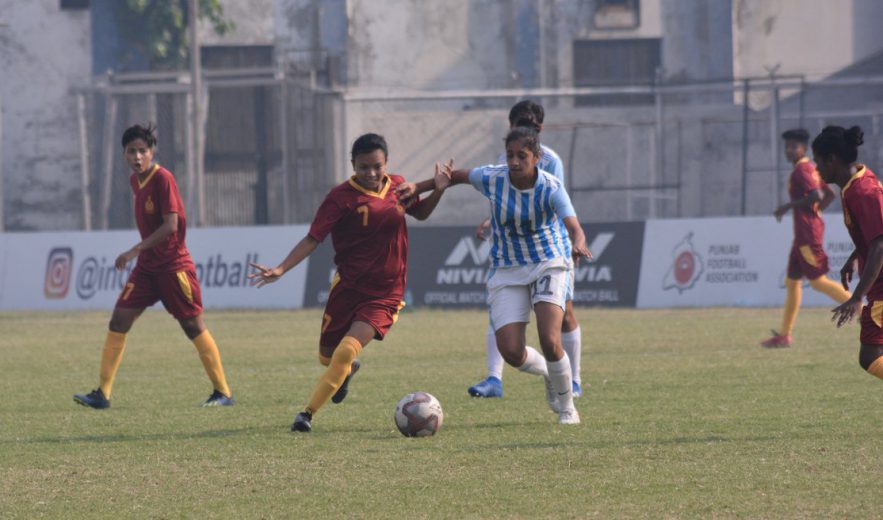 SSB Women Football team kept their chances for semifinal qualification alive after eking out a slender 1-0 victory over FC Alakhpura at the Guru Nanak Stadium in Ludhiana on Monday.

SSB striker Dular Marandi scored the winner, but it was their defender and captain Susmita Marandi, who took the Player of the Match with her gutsy play to keep Alakhpura out. It was a tight match between two equally-matched sides, with long spells of the game being played out in the middle of the park. However, SSB got the lead early on through forward Dular Marandi.

The Jharkhand-born striker chased what was literally a lost cause, as an aerial ball was played in behind the Alakhpura defence. Goalkeeper Neelam rushed out of her line, but Marandi reached the ball just nanoseconds before her and slipped it past the Alakhpura keeper to put SSB in the lead.

That game SSB some impetus as they looked to dominate play in the middle of the park, but Alkhpura also matched them with their brute strength, though the side from Haryana seemed to lack the final pass that would set up their strikers.

Alakhpur upped the ante in the second half, as they looked to put more bodies in the SSB box and launch long balls into the area. But the SSB defence dealt with these threats expertly. Meanwhile, SSB looked to get on the ball and spread the balls to the wings in an effort to stretch the SSB defence and catch them on the counter.

Player of the Match – Sumitra Marandi

“It feels very good. We played really well and it’s a great feeling to have won the game.”