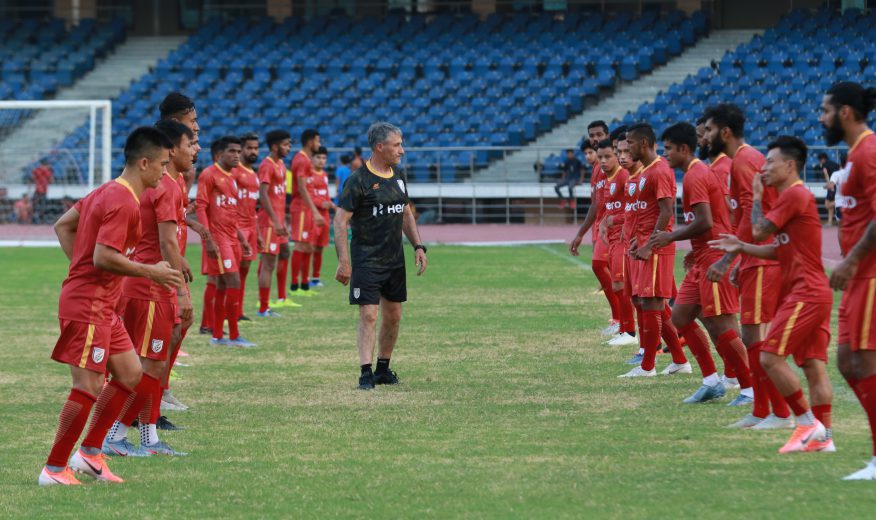 The boys call him the ‘Professor’, even Head Coach Igor Stimac does.

At the practice session of the Blue Tigers, you see him cracking jokes with the players from a distance. When has a fitness trainer ever done that? After all, aren’t they a breed who, with their toughened jaws are just supposed to make you train mercilessly at all times?

The 62-year old Professor Luka Radman, however, is different. Iconic National Team striker Sunil Chhetri shakes his head. “He is good. He is very knowledgeable, and is someone who has worked with a lot of top players, and at top places,” he narrates.

“Most importantly, he is very jolly. It’s not one of the qualities which you need to possess to be a good physical trainer, but it definitely helps. Someone who is jolly, positive, and ready to work – that’s the kind of person he is.”

In addition, he also has a silver medal from the Zagreb World Championship with the Croatian Men’s handball team, and has coached over 15 professional teams all throughout his career. Head Coach Igor Stimac, who himself has brought Luka to work with the Blue Tigers, informs that he knows ‘Professor’ “since he was a 16-year old.”

“He is one of the most experienced fitness coaches in Europe. He has been working with me for nearly 30 years. Since I was a 16-year-old boy, I was introduced to him. He is full of experience, and is exactly the sort of guy we need here,” Stimac feels. “He is the one who will help organising all work needed, and players are already enjoying with him.”

“Of course he is the Professor,” Sandesh Jhingan quips, looking over his shoulder towards Luka. “Needless to say, he is a top guy; he is a great motivator,” adds the defender. “He is bringing his different ideas about fitness, and about how it is done. He comes with a vast experience, and wants us to learn from him. Personally, I have always looked up to the quality of the man, and Professor does it in a very humble manner,” this time Sandesh looks at the pigeon trying to have a quick shower in the fountain outside.

“Professor is a mental toughness teacher,” Pronoy Halder maintains. “Let me put it very frankly. Most players don’t like physical exercises as they tend to be monotonous. You cannot be harping on the same stuff every day. And that’s where Professor stands out,” he narrates.

“The variety of his drills make him special. None of his exercises are monotonous. It’s important for the players to enjoy the physical training, and that’s helping us,” Halder explains. “He is very aggressive. I look at him and tell myself – hey, if that man of 62 years can do it, why can’t I.”

“He always stresses on power. He conducts extreme high-intensity power sessions. He tells us, unless you work on your power, you will lose in those crunch situations.” Currently a match away from being India’s highest-capped International player, Chhetri highlights the “minute details” which Luka works upon.

“There are a lot of minute details from him on how to improve yourself physically. A lot of players are gathering this information from him. Apart from my own experience, the players are also very happy. They feel it’s helping them,” he explains.

Jhingan nods. “All those small basic techniques, which I think at times trainers overlook, it never skips his eye. The Professor’s nature doesn’t allow him any shortcuts. He is tireless,” Sandesh reveals.