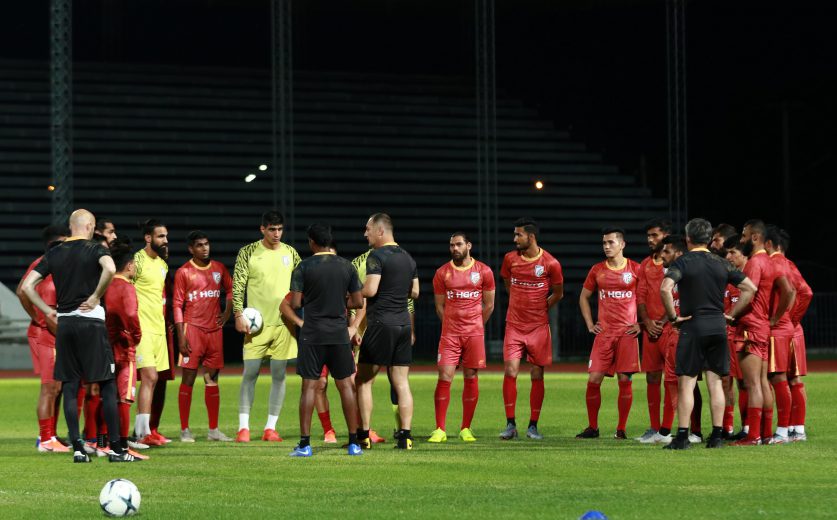 As the Indian Senior Men’s National Team gear up to kick-off their campaign in the King’s Cup, senior members expressed satisfaction at the pathway laid down for the Blue Tigers ahead of the FIFA World Cup Qualifiers Qatar 2022 which kick-off in September.

Iconic striker Sunil Chhetri, all set to become India’s most capped International players if he plays against Curacao on Wednesday (June 5, 2019), highlighted that the build-up to the World Cup Qualifiers “has been the way it should be”.

“It’s brilliant. We are playing Curacao, and then we get either Vietnam, or Thailand in the King’s Cup,” he reflected.

“And then we come back home and play in the Hero Intercontinental Cup where we play Syria, DPR Korea, and Tajikistan. They are strong teams. This is exactly what Indian Football needs. It’s a very good build-up for the World Cup Qualifiers which kick-off in September,” he maintained.

After India kick-off the season with the King’s Cup which concludes on June 8, the Blue Tigers will assemble again later this month for a preparatory camp for the Hero Intercontinental Cup, which is slated to be held at the TransStadia Arena from July 7-18, 2019. The World Cup Qualifiers are slated from September 2019, with the preliminary draw slated for July.

Goalkeeper Gurpreet Singh Sandhu said, “The upcoming five games, combining the King’s Cup, and the Hero Intercontinental Cup are of immense importance. “I want to applaud the AIFF for getting the kind of games they have set for us. Most of the oppositions look so tough, and are at a better level than us. That’s the kind of matches we need. The build-up looks great,” he opined.

“Such matches will make us tougher. For the World Cup qualifiers, you need to put your best foot forward. Under the new coach, the team needs those games to gel well.”

The King’s Cup is India’s first appearance in an invitational overseas FIFA Ranking tournament since 2001, the last being the Merdeka Tournament in Kuala Lumpur. Central defender Sandesh Jhingan maintained, “we need to battle shoulder to shoulder with stronger nations.

“We won’t grow unless we play tough opponents. Tough teams will present their own set of challenges as they will have tougher players. We need to battle shoulder to shoulder with them to see where we stand, and improve on our strengths. I am liking this trend of getting ready for the World Cup qualifiers by playing such games,” he explained.

“The ultimate goal is to qualify for the big tournaments. You have to dream big, to achieve big. I always believe in the philosophy of dreaming big, despite the chances being low. But it’s only when you dream big, you have the hope, and chances of achieving it stay more,” he stated.