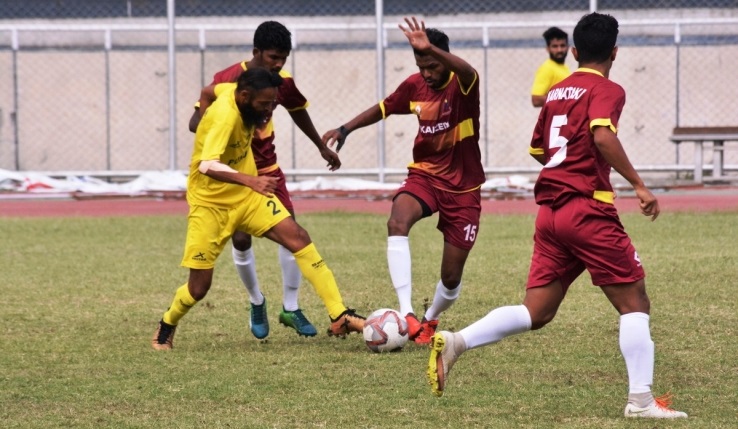 LUDHIANA: Hero Santosh Trophy, the 78-year-old National Championship, has reached its business end of the 2018-19 season – the semi-finals, where Punjab, Goa, Services and Karnataka are set to fight it out on Friday, April 19 for a spot in the final.

After a rigorous number of Zonal Qualifiers, a total of 10 teams made it to the Finals. Services, Goa, Delhi, Meghalaya and Odisha were clubbed in Group A, while Karnataka, Maharashtra, Assam, Sikkim and home side Punjab were placed in Group B.

Group A turned out to be a straightforward affair, with Services and Goa finishing with 10 points apiece, four ahead of their nearest opponents Delhi, with the former finishing as group champions by dint of a higher goal difference, as the two sides are tied on the head-to-head front.

Group B was a more complicated affair, as Punjab, with the support of the home crowd behind their back, shot ahead of the rest of the pack on the last matchday, beating Karnataka 4-3 in a thrilling encounter. While the hosts topped the group with nine points, both Karnataka and Maharashtra finished with seven points apiece, the latter thrashing Sikkim 5-0 to reach their current tally.

The two sides had drawn their game, and had even finished the group equal on goal difference. However, Karnataka went through as they had scored one goal more in the entire group.

With the semi-finals all set to kick-off, let’s take a look at the two exciting matches that will decide the finallists of the 2018-19 Hero Santosh Trophy.

The two traditional heavyweights of the Santosh Trophy are set to face-off against each other in yet another thrilling clash. This encounter would normally be worthy of a final itself, as the eight-time champions Punjab take on five-time champs Goa.

It will be a special occasion for the Goa players, who will be observing the holy occasion of Good Friday after the completion of the match. With a comparatively more star-studded line-up, Goa will look to brighten their Good Friday celebrations on Friday.

While Sukhpreet Singh has been on form for Punjab, banging in three goals in the Group Stage, Goa will be banking on two of their big guns to get on the scoresheet. Their top scorer in the tournament so far has been 19-year-old Pune FC academy prodigy Lalawmpuia, who currently plies his trade at FC Goa Reserves in the Hero 2nd Division. The Mizoram-born striker has already scored four goals so far.

Apart from the exuberance of Lalawmpuia, Goa also have the experience of Joachim Abranches up front. The 33-year-old has brought in his years of experience at top clubs like East Bengal, FC Pune City, and FC Goa to score three goals.

The mix of youth and experience of Goa, and the vigour of a home side that already has plenty of experience in winning the Santosh Trophy could make this a mouth-watering affair.

Services have been on fine form in the Group Stage, where the finished without a single loss. In fact, they only dropped points against a formidable Goa side, against whom they drew 1-1. The Group A toppers have exhibited a sturdy backline, letting in only two goals in their four matches so far, keeping two clean sheets in the process.

Meanwhile, their attack, ably led by Lallawmkima and Bikash Thapa, has fired on all cylinders. Their best moment came in their last Group B game against Meghalaya, which they won by a whopping 5-0 margin.

Karnataka, on the other hand, will be banking on their strong attack-line, that has so far scored the highest number of goals in the 2018-19 Santosh Trophy Finals, so far – 12. Defence has been a bit of an issue for this side though, as they have let in seven goals in their four matches. They were, in fact, leading Group B for most of the part, but finished second after losing 3-4 to Punjab in the last game.

It looks to be an enterprising affair between the attack and the defence in the second semi-final that kicks-off in the afternoon.