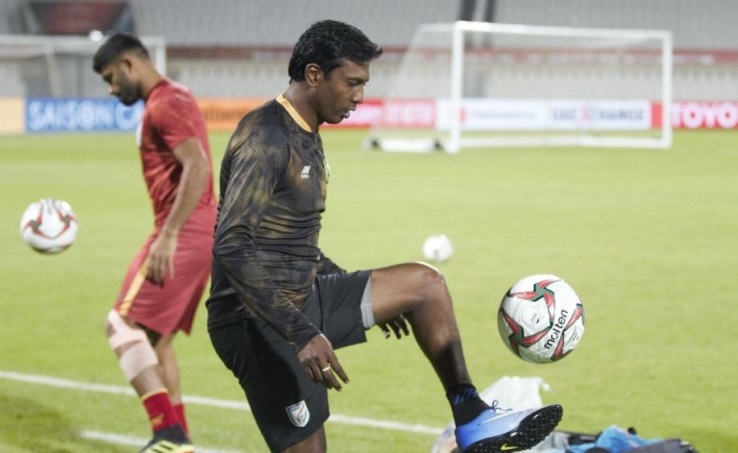 BHUBANESWAR, 17th April, 2019 : As India have come a long distance in the last few years climbing over 70 spots on the FIFA World Rankings, India Senior Men’s Team assistant coach Venkatesh Shanmugam has seen the team go through the shift over the last three years.

“Our team has improved a lot. But all of that that has only come through hard work, and methodical planning,” Venkatesh said, on the sidelines of the Hero Super Cup in Bhubaneswar.

Having captained the National Team himself back in his playing days, Venkatesh, fondly referred to all as ‘Venky-bhai’ is someone who has been in the dressing room both as a player and as a coach.

“It is unfair to compare the quality of players from different generations. I believe that quality is always there, and will always be there. But what makes the difference is how you groom the quality and help the footballer maximise his performance on match days,” he maintained.

“At the end of the day you still have 23 of the best players from your country in the squad. It does not matter which era we are playing in. Rather, what is more important is how we, as the support staff, are preparing them for the matches,” he stated.

Venkatesh had started his sojourn with the national side in the 1998 Asian Games in Bangkok against Japan, a game which the Blue Tigers lost 0-1. However, Venky believes that India, until recently did not fare as well on the International front due to the lack of exposure.

“You look at the current side, and you can clearly see that they go into an International match with the mentality that they are no less than their opponents,” he said. “Back during our playing days we would merely have a camp before any big tournament, and once we were on the pitch, we would be unsure of what to expect,” he opined.

In the last four years, India have played a number of friendly matches against other International sides like China, Jordan, Oman, Puerto Rico, the Tri-Nation Tournament in 2017, the Intercontinental Cup in 2018, amongst others.

“As a footballer these kinds of competitive matches give you the experience of how to react to different match situations. So when you are playing in a top tournament, you do not back down,” he said.

The India Assistant Coach went on to explain that the National Team is exposed to a lot more facilities than before, which has played another role in the overall improvement in the last half-a-decade.

“Around 15 years back, the players could not always avail facilities that would help us with our game. But now, a footballer can access world-class facilities,” said Venkatesh. “To add to that, the players are also being fed with so much information about how to keep themselves fit, what to eat, and how to conduct themselves. These things have only helped them perform better,” he quipped.

Venkatesh also pointed out that the modern media has played a huge role in increasing the accountability of each player.

“Everything you do on and off the pitch is under scrutiny these days. Earlier, if the team was playing abroad, nobody in the country would even know about it,” he continued. “But now, all the attention is on the national team, which is a good thing. The players know that the whole country is watching them and that in itself is a great motivating factor.”